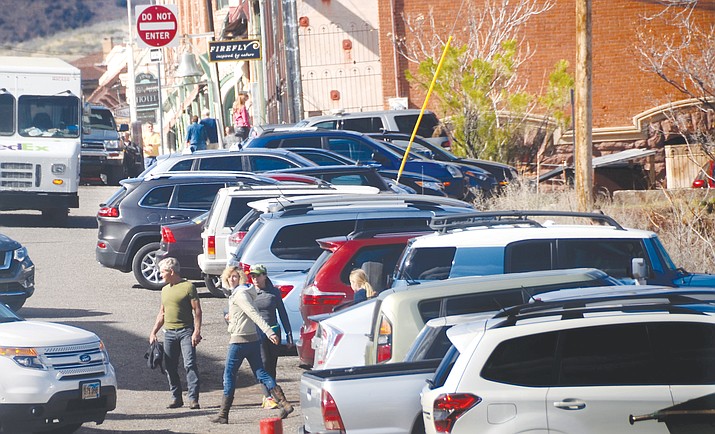 JEROME -- If there’s one thing most Jerome residents can agree on, it is that Jerome’s infrastructure is in desperate need of attention.

Millions of dollars in repairs to be exact, according to Jerome Fire Chief Rusty Blair.

Jerome community leaders and stakeholders talked about the possibility of installing parking kiosks to help fund infrastructure projects Friday at the Jerome Fire Station. With grants few and far between, most agreed that they needed to find another revenue stream to fund these projects.

Eric Jurisin, owner of Haunted Hamburger and Grapes, pushed the idea of installing donation or honor boxes with slits for dollar bills.

Jurisin said he saw a similar practice while visiting Europe.

“It’s an inexpensive way to give it a try,” Jurisin said. He suggested soliciting the welding program at Mingus Union to build the boxes.

Jurisin also said that this method could in theory yield more revenue.

“If you ask for $2, you get $2,” he said, noting that someone more generous give more money.

“I’ve been working on this for 10 years,” he said. “Donations aren’t hard facts.”

Jerome Mayor Alex Barber suggested a compromise where some spots used a donation system while others used a paid-parking system.

But Flatiron owner Chad Hembrough said he would prefer to adopt one system and stick with it to avoid confusion.

“We need an across-the-board cohesive approach,” he said.

Council Member Mandy Worth said one thing that concerned her about parking kiosks, particularly those that only take credit cards, is patrons who don’t carry around cards.

The same argument was made for those who don’t carry around cash.

Blair said in 2017, he conducted a visitor survey where he asked 250 people if they’d be open to paying for parking in Jerome; 85 percent of them were in favor, he said.

Jerome Mayor Alex Barber brought up that the only other way to raise the revenue for infrastructure is to raise taxes.

“No one wants to hear that,” she said.

Jurisin said he recognized the importance of the situation.

“I wouldn’t be here if I didn’t think it was important,” he said. “I am here for the good of Jerome”

The workforce divided into two groups to research methods of implementation.

They will meet again Friday, March 8 at 11 a.m. at the Jerome Fire Department. Nothing will be decided until the issue is brought to town council.