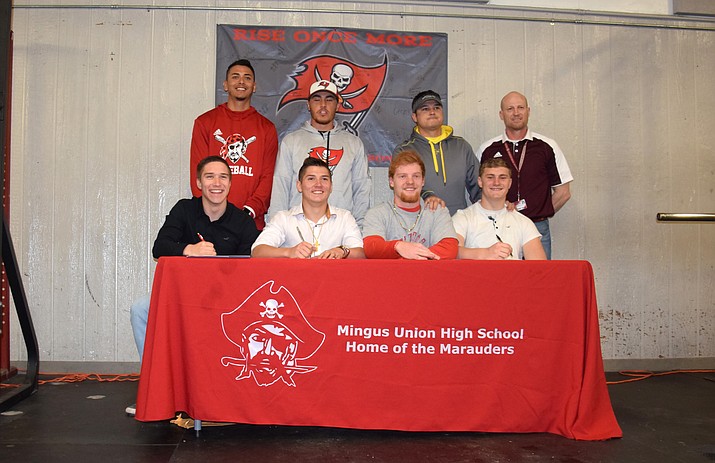 “I’m stoked,” Zabala said. “It’s a dream come true. As a little kid you look at TV and you watch college football and you never think how hard of a journey it is to get there but it was one hell of a journey, I’m so stoked and excited and thankful.”

DSU is located in in Madison, South Dakota and has an enrollment of about 3,000.

“I like it,” Meyers said. “It’s a really small community and it’s just like Cottonwood in a way, the population is 7,000 there and they do things like Football Teams where they assign a player to a family and they can just go there if they want, hang out and they’ll feed them. I really like the community.”

The Trojans compete in the North Star Athletic Association and the NAIA.

Meyers said getting to play in college with three other Marauders is the best part.

“It’s cool, it’s not often that a lot of high school students get to go play college sports, let alone play with four of their best friends from grade school,” Fanning said.

“It’s cool because we’re just going to keep on the tradition,” Fanning said. “We’re going to try and get that team better and try to do something good at that school. I honestly think we can because we got the capability and coach Anderson, he’s a really good coach and Ortiz going there and coming here, that was really cool. So we just kinda want to follow in the footsteps.”

Although Oriz is happy about his players going there, he didn’t steer them that way necessarily.

“It’s pretty exciting, I played for coach Anderson, so I know what it’s like, that’s one of the reasons that I chose that school, was due to the small town culture,” Ortiz said. “It was a place that I knew I could go to out of Scottsdale and contribute right away. So it’s kinda neat to see them kinda follow in my footsteps. That was never my intention, they ended up going on visits and ended up liking it and at the end of the day when we talked finances and what their scholarship amounts were and what they have available to them and the possibility of what their out of pocket costs are going to be, that was the better choice for them and their families, financially.”

Fanning intends to major in business and minor accounting in accounting, Zabala in exercise science and Meyers in business management.

Ortiz said DSU offers them a chance to growing as athletes and people.

“It’s a smaller university, they have the chance to contribute right away and the small town culture is kinda like what they’re coming from here so it’s not like they’re going to get star struck stepping into the limelight of a bigger university,” Ortiz said. “It’s a very competitive league that they’re going to play in on an annual basis so they have opportunities to grow as college athletes but more importantly work towards a degree that they can get at any other university.”

Streck, who won the state championship in the shot put last year and finished third in the state in the discus, will focus on football in college but has the opportunity to compete in track and field too.

“From what I’m told is Dakota State has looked at him for track, there’s possible scholarships for him in track, so he could be doing dual,” Ortiz said. “I know the majority of that money will come from football, so that would be the focus, obviously academics as well. Football and academics is a full time job in itself, so when you start tossing around another sport on top of it, things start looking a little hectic but I don’t doubt that he can’t handle it and again if that helps his financial standpoint for him and his family, then my advice would be to do it.”

After seeing the first high school players he’s coached since he took over the program sign with a university, Ortiz said their success will inspire the younger Marauders like how the softball and baseball players who moved on to the next level have.

“I think it helps in terms of what the program could be when you start talking athletes and what the type of athletes this school has,” Ortiz said. “We’ve had more baseball players sign in recent history, obviously four football players this year, softball’s doing a good thing right now. I think it’s a testament to the type of kids that we have here in Cottonwood or at Mingus and how I feel it helps the younger kids is that could be them if they work out, play football to the level that they’re capable of, they can be just an Antoine, a Kendrew, a Gabe or a Colby. That’s the standard now, if a kid wants to get into college and their financial means might not be there, the way to do it might through athletics. They gotta work for it but those guys, the previous guys set the standard as to what it could be.”