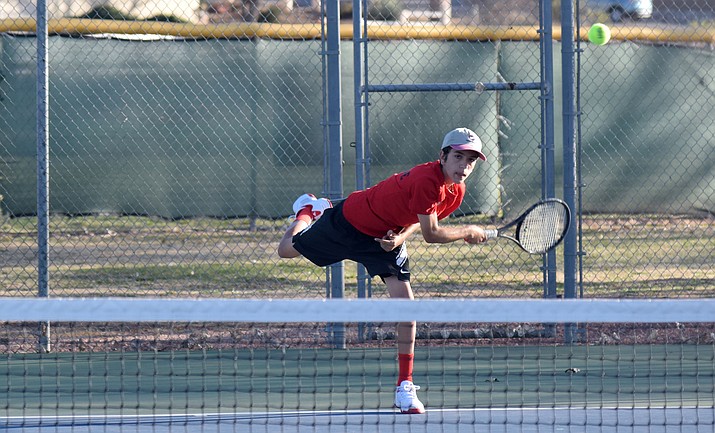 Led by a handful of returnees and an unbeaten rookie, Mingus Union boys tennis is off to an undefeated start.

On Tuesday at home the Marauders beat Glendale 6-3 to improve to 4-0 this season.

“We lost our No. 1 player and our No. 6 player last year but I have four returning players and they all are playing well,” Mingus head coach Larry Lineberry said. “(Tuesday) they all won and they’re the anchor of the team. Then I have a freshman, Jack Zahoudanis, who is undefeated. He just came on the team at the beginning of the season and he has won for us every time. Ryan Russel is our No. 5 player he lost (Tuesday) but he’s generally been winning his matches. We just need to get a little bit better at doubles.”

Tuesday’s win came after they dropped two of the three doubles matches but rallied to win the overall match.

“We’re undefeated after (Tuesday), a close 6-3 win over Glendale High School and I was very pleased because we were down after the doubles 2-1, so we had to win four of the six singles matches and we wound up winning five of the six,” Lineberry said. “So I’m very pleased.”

Senior Brigham Peterson has taken over the No. 1 spot, going 3-1 so far in singles and along with senior Jordan Finger, undefeated in doubles.

“Brigham was a star (Tuesday), he and Jordan Finger won at No. 1 doubles easily and then (Tuesday) at No. 1, Brigham played a tough match, he won 6-4, 7-5, against a good player,” Lineberry said. “Always the No. 1 position is a tough position. Most teams have at least one good player and Brigham won in straight sets, so he won two points for us and his point was the fifth point, which secured the match for the team.”

Junior John Valentine played No. 2 singles for the Marauders on Tuesday, rebounding in singles.

John played No. 2 today and

“He and Travis O’Donnal lost their doubles match but John won easily,” Lineberry said. “He was our first singles win for us, so got us on the right track with a 6-2, 6-2 win in singles.”

Lineberry, who started coaching at Mingus Union in 2016, said they’re in the best position since he took over the Marauders.

This year they are playing in Division II Section II and so have a lot of unfamiliar foes.

“They’ve reset the schedule this year and there’s six teams we’ve never played before,” Lineberry said. “So I don’t know how it’s gonna turn out but the last half of the season are division matches, that determine if we go to the State. Our team goal this year is to make it to the State. We were 10-4 last year and lost going to the State as a team on a technicality and I don’t want that to happen again this year because this is a good team. It’s the best overall team that I’ve had in four years and I’m really that it works our for us to go as a team to the state tournament.”