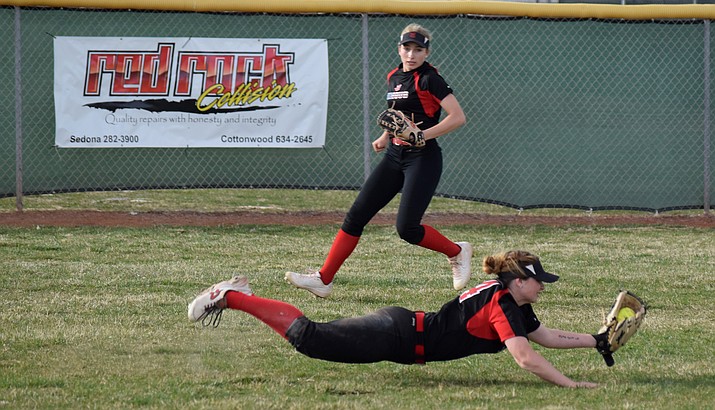 Mingus senior Paige Bartel dives to catch a fly ball during the Marauders’ 16-1 win over Prescott on Thursday at home. VVN/James Kelley

Although they’re young, Mingus Union softball players are off to a perfect start this season.

On Thursday afternoon, the Marauders beat Prescott 16-1 in five innings to improve to 6-0.

“The team looks really good,” Mingus head coach John Brown said. “We’re really young but we’re really good. I know the statistics say we have six seniors but we also had 20 freshmen come out this year and we’ve got some freshmen in the starting lineup. So our seniors are contributing but we’re young and we’re deep, I guess is the best way to put it. But they’re looking good, I’m happy with them.”

She is going to play at UCF next year.

“It’s great to have Maddie back,” Brown said. “Maddie has got a whole different outlook on life and she’s a good teammate, she’s a good senior leader. Obviously she’s a great ball player, but for her to bring all that to the table this year has been amazing for us I’m real happy with Maddie right now.”

“I’m real happy with it, it’s one of the better starts we’ve had in Mingus history and it looks pretty promising for the rest of the season,” Brown said. “So I think we’re going to be very competitive and W’s are great, I love W’s but I’m more happy with the way they’re playing, they’re trying to find a way to win every game and that’s important.”

The Marauders have outscored opponents 63-14 so far this season.

“We hit the ball and we run bases really aggressively,” Brown said. “I’m happy with the way they’re making adjustments and hitting the ball well and I’m real happy with how aggressive they are on the bases.”

The Marauders’ start has come despite featuring a pair of rookies in the circle.

“Pitching’s great, it’s very young,” Brown said. “We’ve got two freshmen and a sophomore. Our sophomore’s got a little bit of an injury right now, so the two freshmen are kinda carrying us right now, but they’re doing great, they’re experienced kids, they played a long time and I think they’re going to be good for quite a few years.”

The Grand Canyon Region is expected to be tough again this year. After they knocked the Marauders out of the state tournament last year, Brown expects Coconino to be good again this year, along with Bradshaw Mountain.

“It’s gonna be really tough,” Brown said about the region. “Coconino is stacked with a lot of seniors, so they’re gonna be good, but Bradshaw’s got a little ace in their hole, they inherited a couple pitchers this year from a club program and both of them throw over 60 miles per hour so they’re gonna be very hard to beat but other than that it’s the same region we’ve had before. We should be very competitive in it but I know that Coconino and Bradshaw are going to be very tough too.”

The Marauders’ next home game is Monday against Phoenix Arcadia at 4 p.m.

Over spring break the Marauders will head to the Gracie Lee Haught Invitational before returning to region play with a 2-0 record.

“It’s great, I mean you get one of them out of the way in a week and then you move and you move on to the next one,” Brown said.