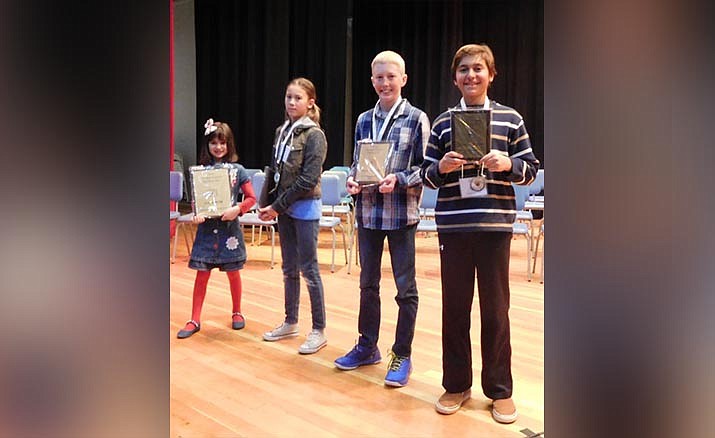 “Miss Alpert, an extremely composed, articulate, confident and poised young lady, was the 2018 runner-up, when she was a second-grader,” said Yavapai County School Superintendent Tim Carter.

“We know she will do extremely well when she represents all of Yavapai County at the Arizona State Spelling Bee in the studios of KAET-TV at Arizona State University on Saturday, March 23.”

Carter also served as moderator for the competition.

The State winner goes to nationals in Washington, D.C. later in the spring.

Alpert battled through the last six rounds with runner up Rebecca Bond, a seventh-grader from Prescott Homeschoolers, for first place.

“Congratulations to all. Yavapai County is proud of the efforts these young spellers put forward.” said Carter. He explained that winners receive engraved plaques and checks totaling $750 that ranged from $300 to $100, based on place in the bee. All students received medals for competing.

Thirty-six spellers had qualified earlier for the county competition by winning their local school-based bee. The county bee is effectively a “Tournament of Champions,” with students coming from school districts, charter schools, private schools, and from the home schooling community.

Among the words that proved difficult for competitors were these: charpoy, bromeliad, guillotine, misogynist, egregious, poltergeist, ostentatious, ergonomic, colloquial, juggernaut, gristle, and triumvirate.

“As a whole, spellers did an honorable job and their schools and families should be proud of them,” Carter said.

BMO Harris Bank, with local branches in Prescott, Prescott Valley, and Sedona, has provided significant funding to support the Yavapai County Spelling Bee for more than a decade. BMO Harris is a family-oriented business that has a long history of supporting educational events in local communities.

The event was originally scheduled on Saturday, Feb. 23, in Camp Verde, but was rescheduled because of adverse winter weather conditions.