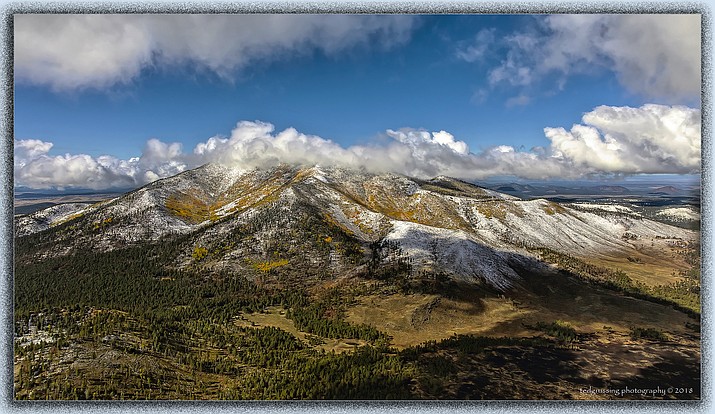 I have been doing aerial shooting of fall colors on the plateau since 2007 and 2018 was the best ever … first time ever that I had near peak colors, snow, clouds and blue sky with great lighting all at the same time. I was able to get hundreds of shots that were keepers and here is another of them. For sheer beauty, it is difficult to top Kendrick Peak as it is a rather compact mountain compared to the San Francisco Peaks and relatively easy to get the entire mountain and surrounding base. Kendrick tops out at 10, 413’ ranking it among the highest peaks in Arizona … it along with Bill Williams, mountain, Sitgreaves and Elden are dome volcanoes. Some info on dome volcanos http://volcano.oregonstate.edu/lava-domes

More rain and no fly days … still pouring outside and it makes for very pleasant dreaming. Sights like this photo are nice to bring to mind whilst closing out the day.

Have a wondrous day … live it, keep breathing, smile and at days end it should be a fine day to remember.