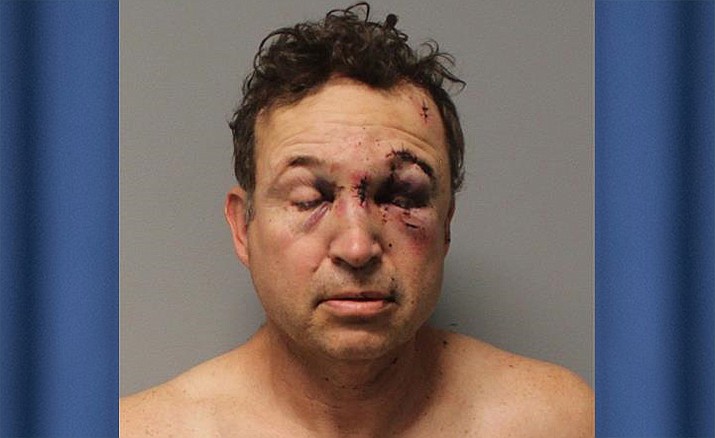 VERDE VILLAGE – A Verde Village man faces charges of attempted murder, aggravated assault and disorderly conduct after he was found punching a woman and dragging her around the front yard.

The Yavapai County Sheriff’s Office was called to a family fight in the 1700 block of South Carpenter Lane March 10, around 6:30 p.m.

According to a news release from Yavapai County Sheriff's Office Public Affairs Coordinator Dwight D'Evelyn, deputies were alerted that “a woman had been punched while being dragged around the front yard.”

When the first deputy arrived, said D'Evelyn, he was flagged down by a boy pointing to a particular house.

“The deputy stopped and began walking down the driveway when he saw a man, later identified as 49-year-old John Scrivner, standing behind a woman, age 50, while holding a large solid metal bar across her chest,” D'Evelyn explained. “Scrivner was lifting the victim off the ground using the bar and she was screaming for help. The deputy ordered Scrivner to let the victim go and he ignored the command as bar rose towards her neck. At this point, the deputy wrapped his arms around Scrivner’s upper body to prevent Scrivner from moving his arms as the deputy attempted to pull the suspect away from the victim.”

D'Evelyn said as the deputy began gaining control, Scrivner still refused to release his grip on the victim while the bar remained pinned across her upper body.

“A second deputy arrived and both deputies used necessary force to stop Scrivner’s attack and take the suspect into custody. One deputy sustained minor injuries. During the ambulance ride and while at the hospital, the suspect fought with medical personnel and spit at them on several occasions. A spit mask was placed over his head as he continued to resist before being brought under control,” D'Evelyn said.

Prior to the arrival of deputies, the suspect had attacked his 59-year-old girlfriend in the driveway.

“He choked her around the neck with his hands and told her he was going to kill her,” D'Evelyn said. “He punched her in the face several times and drug her around by her hair. She eventually broke free and ran to a neighbor’s house and called for help. While this was going on, a neighbor across the street heard some commotion and went next door to check on the activity. As she walked up the driveway while calling 911, the suspect came up from behind her with the metal breaker bar, began to drag her up the driveway and pick her up with the bar around her chest. She later told deputies, the suspect kept trying to put the bar around her neck, but she was fighting with him and was able to keep the bar from rising. She mentioned thinking she was going to die. She noted that while she was being attacked, her 10-year-old son came outside and saw what was going on. He picked up rocks and threw them at the suspect trying to stop his attack.”

The reason for this attack was unclear at the time of this release, said D'Evelyn.

Scrivner was treated at a local hospital and eventually booked into the Camp Verde Detention Center on charges including two counts of attempted murder, two counts of aggravated assault and disorderly conduct.