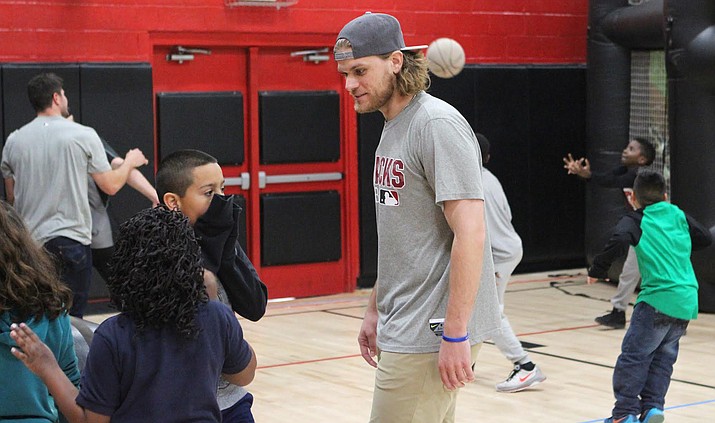 Arizona Diamondbacks pitcher Matt Koch, here interacting with kids at an Arizona Boys and Girls Club, has a child of his own now. (Photo by Tyler Drake/ Cronkite News)

PHOENIX – Welcoming a baby is always an exciting time for new parents, but for Major League Baseball players, it comes with challenges.

Arizona Diamondbacks pitchers Zack Godley and Matt Koch both welcomed newborns this past year and are learning to navigate their dual roles as fathers and MLB pitchers.

Koch and his wife, Alison, welcomed their baby boy Jaxon in July of last year.

“He’s only been to one game, and it was exciting to have him there and to see him after the game was a lot of fun,” Koch said.

Even though they are professional athletes, they don’t get out of typical parenting duties off the field. Koch, with a smile on his face, proudly stated his son has been quite easy.

“He’s actually sleeping through the night now, so we’ve been pretty lucky with that, but we did take turns and did what we could to help each other out,” Koch said.

Being away from his son is hard but Koch is happy that during spring training, he gets to see his son every morning before he leaves and every night when he returns, something that doesn’t happen once the season starts.

Godley feels fortunate that his wife, Autumn, and baby, Audrey, who was born in September, come with him on every road trip, including those during spring training.

“This is the first time my wife is going to be with me for the whole season, so it is an exciting time for us, but also a learning time for us with a newborn,” Godley said. “It’s just a work in progress right now.”

Time in the offseason with family is something the players say they treasure.

“There really isn’t a transition because you are always a father, but transitioning from offseason to in-season is a learning process for my wife and I,” Godley said.

Godley said that he and his wife are still working out a schedule, but that she will stay with him almost all of the season, with a couple of trips planned to return home. With his focus on giving his team any chance he can at winning a ballgame, however, missing moments with his daughter are inevitable.

“That is the hardest part about this,” Godley said. “(It’s) being away from your child and not being able to see the little growths, and the bits of personality that come out each and everyday that you don’t get to see when you are away from them.”

Their roles as fathers affect their lives in many ways, and it’s not something that Godley or Koch are able to turn off when they step on the field.

“My mindset as a player hasn’t changed,” Godley said. “My mindset is to come out here to compete and play this game and enjoy every minute of this game.”

But for Koch, he said his son has given him a little extra motivation, especially when he goes home and sees Jaxon smiling, clearly happy to have his dad home.