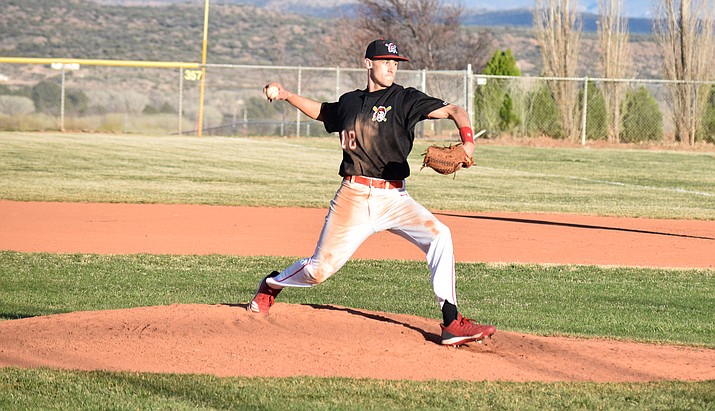 Mingus senior Chaz Taylor pitches during the Marauders’ 11-1 home loss to Prescott on Mar. 5. After two years away from the sport, he’s returned to the diamond. VVN/James Kelley

With an almost all-new team, Mingus Union baseball has started this rebuilding year winless but there have been some bright spots.

The Marauders opened the season 0-6, 0-2 in Grand Canyon play.

“We’re been struggling honestly,” Mingus head coach Erick Quesada said. “It’s been a pretty up and down year, we’ve yet to win, which if you would have told me that, I would have said you’re crazy but we’ve played some really, really good teams. I think five of our six losses have been to teams that are top 10 in the state, so our competition is really, really good.”

This year’s Marauders started the season without a lot of varsity experience.

“We have two, three guys that have played legitimate varsity time last year and the rest are all guys who have yet to play varsity,” Quesada said. “So we’re a really young team but other than that we’re really just trying to find out who we are right now.”

However, the Marauders did return 2018 first teamer Justin Tanner and All-Grand Canyon second team member Chris Mathe. Plus other seniors Cameron Machek and Chaz Taylor, returning to the sport this season, have impressed.

“Chris Mathe has really done an extremely good job,” Quesada said. “Chaz Taylor took two years off and he’s out here doing amazing and then Justin Tanner’s been doing well, Cameron Machek, my seniors have helped us get to where we want to be but we’re just not there yet.”

Mingus Union’s next game is Mar. 19 at Mohave and their next home game is Mar. 21 against the Thunderbirds again, at 3:45 p.m.

Although they’ve started the season 0-2 in the region, they have 10 Grand Canyon games to catch up.

“The region’s really tough,” Quesada said. “Lee Williams is the one who everyone wants, Coconino, you can go all the way down. You had six of the seven teams go to the state tournament last year from our region, I mean that says a lot. We lost some guys, I know all the other teams lost some guys but we’re still in the hunt for a region title. We’re not counting anything out for the year. We’ll be fine, just like I said, trying to find out who we are right now.”