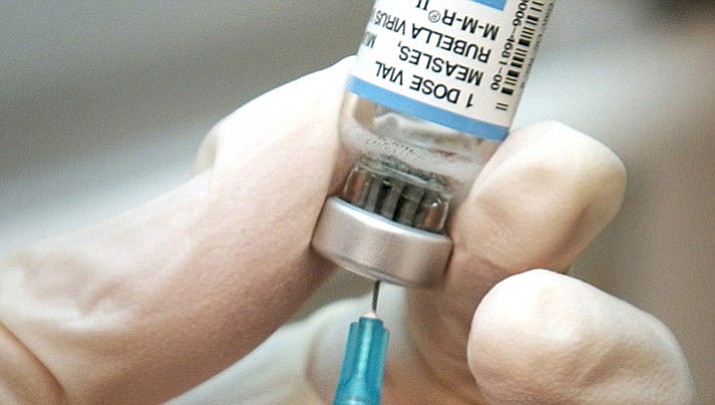 Arizona Department of Health Services Director Dr. Cara Christ says it is important to make sure you are fully immunized against measles. (Courier, file)

Measles was declared eliminated in the United States in 2000, but scattered outbreaks have occurred in recent years. This year there have been five outbreaks — in New York, Texas, and Washington State for a total of more than 120 cases.

The World Health Organization has ranked vaccine hesitancy — the growing resistance to widely available lifesaving vaccines — as one of the top 10 health threats in the world for 2019.

More cases of measles could soon emerge in Arizona, state officials said two days after the state confirmed its first case of 2019 in Pima County.

Dr. Cara Christ, Arizona Department of Health Services director, said the agency is still probing whether the 1-year-old child who contracted the disease exposed others to measles. The baby’s family recently brought the infant on a trip to Asia, according to Azcentral.com. “We likely will start seeing the next round of cases -- it’s usually about 14-to-21 days -- so I believe that [health officials] are looking at the onset at the beginning of March,” Christ said. While Christ said she wasn’t “particularly concerned” that vaccinated people would get sick, given the vaccine’s 97-percent prevention rate, unvaccinated people who come in contact with measles have a 90 percent chance of infection.

Measles is extremely contagious. You just have to be in the same room as someone infected - even if that person were to leave, the virus lingers for up to two hours.

“Really, it’s the airborne exposure that we’re concerned with because all you have to do is be in the same room and breathe it in and you can become infected with measles,” Dr. Christ said.

According to the Mayo Clinic, people show no symptoms up to two weeks after being infected. The symptoms for measles begins with flu-like symptoms: Cough, runny nose, and conjunctivitis. But after two or three days of that, fever spikes to 104 or 105 degrees and the telltale red dots appear on the skin, first on the face, then spreading down the body.

The rash usually lasts for three to five days and then fades away. In uncomplicated cases, people who get measles start to recover as soon as the rash appears and feel back to normal in about two to three weeks. But up to 40 percent of patients have complications from the virus.

Because this virus is so contagious, if you believe you may have symptoms, officials are asking you to call your physician before going to the hospital.

The hospital health officials in Pima County say they are on high alert for 21 days. They’re also speaking with the family to see where they have been in the time since the baby has been infected.

Persons who have had measles in the past have lifelong immunity. Since measles can be confused with other infections that cause fever and a rash, a person needs a special blood test to be sure they are immune.

How safe and effective is the measles vaccine?

Extremely safe and effective. The measles-mumps-rubella (MMR) vaccine causes no side effects in most children. Small numbers may get a mild fever, rash, soreness or swelling, the CDC says.

Adults or teenagers may feel temporary soreness or stiffness at the injection site. Rarely, the vaccine might cause a high fever that could lead to a seizure, according to the CDC.

Children should receive two doses of the vaccine: the first when they are 12 to 15 months old; the second when they are between 4 and 6 years old.

If infants who are between 6 and 11 months old are about to travel from the United States to another country, the CDC recommends they receive one dose of the vaccine beforehand.

Ninety-four percent of children in the United States get the recommended two-dose vaccine.

One dose of the vaccine is about 93 percent effective; two doses boost that number to 97 percent, the CDC says. “People who don’t get the vaccine are at very high risk for contracting measles. “Almost everyone who has not had the MMR shot will get measles if they are exposed to the measles virus.”

For questions about the measles in Yavapai County, contact Stephen Everett, YCCHS Epidemiologist @ 442-5252.