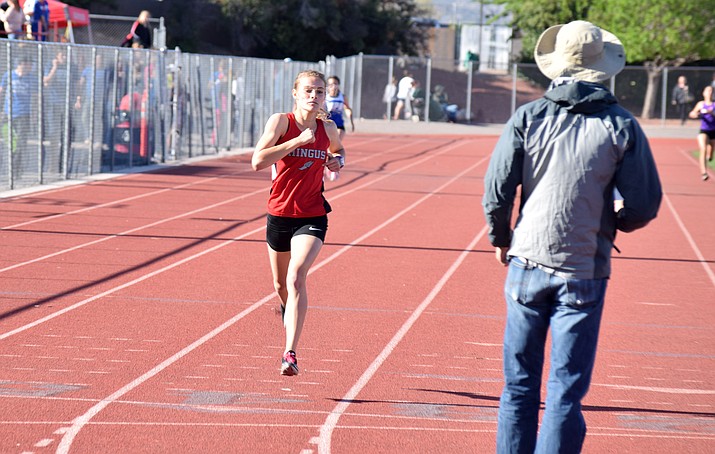 Two weeks ago, Babcock opened her season with the 400-meter dash – an event she claimed the Division 3 state championship last May – and continues to lead the state rankings with a 60.05-second clocking. Last week at the D3-4 Small Schools Invitational, Babcock stepped up to her more familiar distance of 800 meters and dominated the field with a 2:19 clocking, which also leads the D3 state rankings by 7 seconds over her nearest competitor.

Mingus is also showing good early season form in the 4X400 relay events, with both the boys and girls teams nailing down state provisional qualifying times.

Both teams are ranked in the No. 10 spot this week in D3 rankings.

The boys’ team of Taylor and John Capite, Tyler Koch and Silas Willoughby have run 3:41 this season, while the girls team of Babcock, Cassidy Vergara, Tatum Barker and Kamber Delahel have clocked in at 4:32.

Also nailing down early season provisional qualifying times have been the Mingus boys and girls 4X800 relay teams. The boys’ team of Willoughby, Dallin Gordon, Joe Calhoun and John Capite is ranked No. 10 in this week’s D3 rankings at 8:58. Willoughby also is ranked No. 7 in the open 800 at 2:07. Gordon is 1 second back and is ranked 16th in D3 this week.

The girls 4X800 team of Claire and Aubrey Peterson, Josey Valenzuela and Estefana Parra are ranked No. 22 in Arizona D3 with an 11:45 clocking.

Other top performers for the Mingus girls include:

• Junior Andrew Peterson is ranked No. 9 in the high jump with a best jump of 6-feet even.