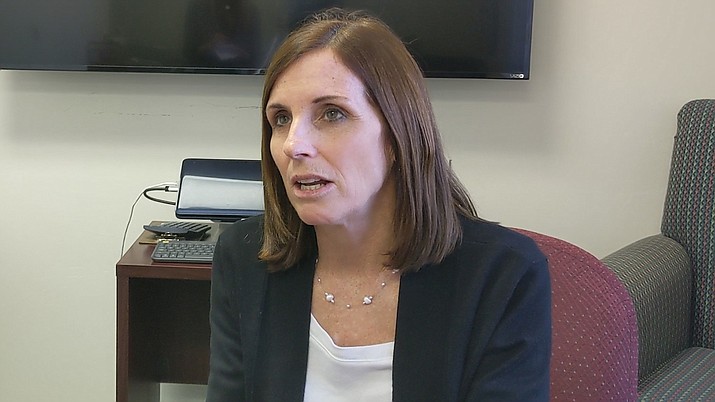 COTTONWOOD -- U.S. Senator Martha McSally visited the Verde Valley Friday as part of her 15-county “two ears, one mouth” tour. The purpose of the tour is for her to get to know as many communities as possible and figure out ways they can be helped at the federal level.

She met with various community leaders and stakeholders at the Cottonwood Chamber of Commerce building Friday and listened to key issues facing Yavapai County, specifically the Verde Valley.

“Every county and every community has its unique challenges and opportunities for sure but there has been some themes across the state,” she said in an interview with the Verde Independent.

One of these trends she said, is the opioid epidemic.

“I hear again today from leaders out here in Cottonwood that it’s not just opioids,” she said. “As we crack down on opioids and we’re providing more opportunities for treatment for people, we’re starting to see methamphetamine is popping up again.”

McSally noted as cartels become more creative in their approach, communities need to be more holistic in how they’re preventing, educating and treating substance abuse.

“Tragedies we’ve heard from every community are real,” she said. “So many families are being impacted by this and we have to have a whole-of-society approach.”

In February, President Donald Trump declared a National Emergency over the U.S.- Mexico border insisting there is a security and humanitarian crises. He added there was an “invasion” along the border of gangs and drugs.

According to Pew Research Center, there are actually fewer undocumented migrants living in key Arizona metropolitan areas than there were more than a decade ago.

McSally said she backs Trump’s declaration, however. She said she is “extremely frustrated represenating a border state.”

“People are playing politics with what is a security and humanitarian crises at the border,” she said. “We are now seeing cartels taking advantage of loopholes in our laws and trafficking children in a way that has been unprecedented.”

McSally said everyone needs to listen to those on the ground “who are dealing with this crisis every single day.”

Another theme McSally said she is learning about is infrastructure issues.

“Whether that’s I-17, or the I-11 project or even just local infrastructure needs where there could be some federal funding.”

McSally added that she learned about local industries need for qualified workers. She said she is curious to learn more about the Career and Technical Education (CTE) programs in the Verde Valley.

“It sounds like a great model for learning how to address some of these issues with young people,” she said.

On Thursday, McSally introduced legislation to reauthorize the Debbie Smith Act in an effort to help fight rape kit backlogs.

McSally shared last week during a congressional hearing that she was raped by a superior while serving on the Air Force.

“This is very important as someone who is a sexual assault victim myself,” she said. “The Debbie Smith Act provides resources to local communities to process backlogs in rape kits and to assist them in support to the criminal process to identify whether its old cases or new cases. To be able to identify who the perpetrators were and bring them to justice.”

McSally said getting justice for sexual assault survivors is something that’s personal to her.

“The entire military has a sexual assault problem,” she said. “Some initiatives have been put in force over the last year and some of the positive things really have happened but more needs to be done. It’s unacceptable that we have over 6,000 reports of sexual assault in 2017.”

The package bundles several different land exchange agreements in areas like Bullhead City, La Paz County and Prescott. H.R. 247, or the Cottonwood Land Exchange Act of 2019, swaps county land for National Forest land. In the exchange, the Coconino National Forest receives 369 acres of Yavapai County land while the county gets 83 acres of forest land in Cornville. The land the county is receiving will help expand Cornville’s Windmill Park.

“This is one of those examples where it literally takes an act of Congress for local communities to get better access,” she said. “Congressman (Paul) Gosar and I worked together on this land exchange bill, we then introduced it in the Senate, working with Senator (Kyrsten) Sinema and we were able to include it in the larger lands package that was just signed by the President a couple days ago.”

“Sometimes the access is a challenge,” she said. “There are cumbersome rules about having to drive long distances to get to doctor’s appointments.”

Some of these issues, McSally said, have been addressed with the VA Mission Act, a bill she co-sponsored. The act allows veterans in certain circumstances to get medical care from private physicians.

“It’s being implemented over the next year,” she said. “But I want to make sure we are providing strong oversight during that implementation so that veterans get the care they need regardless of where they live and from the doctor that they choose.”

“She understand the workforce housing issues and knows that water is a key issue in Arizona,” he said. “She was also aware of the need for mental health access and helping veterans.

Christian Oliva del Rio, President/CEO of the chamber said he has a newfound respect for the Senator after Friday’s meeting.

“Her reaching out to us on this local level is great,” he said. “What I got from her is she is really wanting to see what her constituents think and need.”