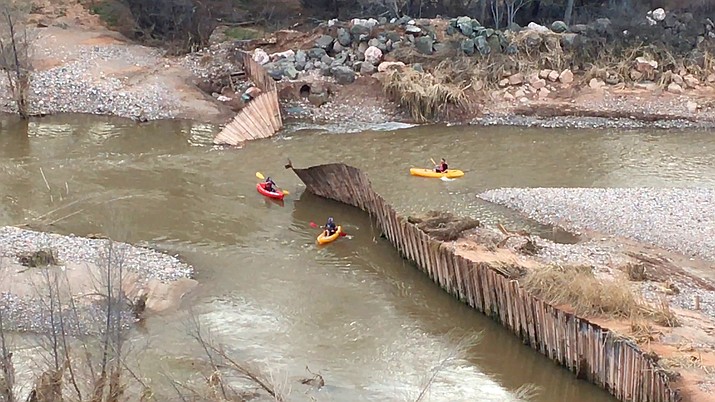 Kayakers float past the breached dam in Clarkdale owned by Freeport Minerals. The company does not know when it will remove the damaged dam yet. VVN/Vyto Starinskas

Vehicles traveling on Sycamore Canyon Road soon will see a flurry of activity as Freeport Minerals Corp. begins construction on a permanent place to dump and store contaminated soil from yards in Clarkdale.

A construction staging yard filled with bulldozers, fences and traffic cones have appeared across from the entrance of the Lower TAPCO River Access Point, a popular location for kayakers to launch to float downstream to the Tuzigoot River Access Point.

Arizona and Yavapai County governmental agencies have approved the permanent, lined soil repository site on the parcel of land owned by Freeport

“Associated with this work at the company’s construction staging yard is reactivation of one of the company’s existing wells that will provide water for dust control at the repository site,” explained James Telle, spokesman for Freeport.

Clakrdale Town Manager Gayle Mabery said Freeport will install a water tower near the well site and will fill water trucks from that location.

The goal of the voluntary United Verde Soil Program is to clean up property from smelter-related impacts to the soil in Clarkdale from the former smelter, which operated until 1953, Telle said. Freeport is offering soil replacement and restoring of landscape at no cost to property owners,

About 550 properties in the UVSP study area are currently participating in the program, Telle said.

Crews hired by Freeport began cleaning up contaminated soil from yards and public property in Clarkdale last May, but the voluntary project stopped when the clean-up subcontractor left town in October.

Freeport said the cleanup will re-commence this summer after a new clean-up crew is hired. The contaminated soil will be taken to the lined repository currently under construction on Sycamore Canyon Road.

The UVSP had completed remediation and restoration work on 41 properties in Clarkdale before crews left town, Telle said, including Main Street Park. That soil has been stored at a temporary site on Sycamore Canyon Road.

Meanwhile, as Freeport constructs the new soil repository site, the company soon will tear down a nearby dam on the Verde River that was damaged during a storm a month ago.

Telle said there is no time frame on when the company will take down the 105-year-old dam.

The dam was installed to divert water and feed nearby Pecks Lake, which is on Freeport land. Freeport will continue to get water from the Verde River to feed the lake, but the company is still working on a plan to accomplish that, he said Wednesday.

In the company statement, Freeport could not estimate the time it would take to remove the dam structure, and “establishment of an alternate point of diversion.”

It will take time and work by Freeport Minerals Corp. engineers and other entities to determine how Peck’s Lake will be fed with water in the future, he said.

Before the dam was built, the river meandered through the river’s natural flood plain. Pecks Lake was never a natural lake and if not fed with river water, especially in the dry months of summer, it would revert back to a wetlands fed by natural springs, Mayor Doug Von Gausig said.