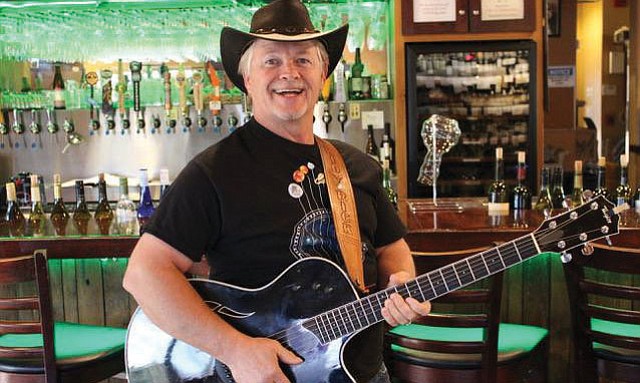 The Wallens, featuring Indiana singer–songwriter Brian Keith Wallen, return to Vino Di Sedona March 27, 7-10 p.m. Brian is an award winning blues performer who now performs as a duo with his wife Molly. Brian’s 2017 tour had him playing over 100 cities in the United States and Europe. In just a few years, Brian has released multiple albums and performed over 1,000 shows in 26 states.

Sedona’s best Open Mic night, hosted by Dan Rice, is every Thursday, 6-10 p.m. at Vino Di Sedona. Each musician is allotted an amount of time, or number of songs, and every week brings a variety of new talent along with regulars like KB Bren, Randy J, David Harvey, Robin Bryer, Jim French, and Michael Peters who frequently play at Open Mic.

Beatles night with Tommy “Rocks” Anderson is March 29, 7-10 p.m. Tommy is an acoustic rock musician who has performed on stages throughout Arizona. Tommy combines a mix of classic rock, pop, reggae, R&B and original songs along with the best of the Beatles to create truly memorable shows. Tommy was the bandleader for the popular Beatles cover band Ringo McLennonSon, playing clubs and festivals across Arizona.

Saturday Wine Tasting on March 30 features Rick Busbea. If you ask Rick to label his music style, he will jokingly tell you, “Caribbean Country Classic Rock.” As he plays favorites by artists ranging from Kenny Chesney and Johnny Cash to Van Morrison and Marshall Tucker, it’s easy to see his point. Rick does play some original music, but his passion is cover songs to take his audience down “memory lane.” This belief led to the creation of the “Rick Busbea Jukebox” so his audience can pick favorite songs for him to play.

Vino Di Sedona welcomes back Whitherward March 30, 7-10 p.m. Whitherward is a power folk duo with singer-songwriters Ashley E. Norton and Edward A. Williams. Founded in Nashville in December of 2013, the duo has built a catalog of varied, intricate songs that explore the effects of the human condition. Beginning their career together in the writer’s rounds of Nashville, Ash and Ed grew into a full-time touring duo with a move out west to Denver in late 2014.

Blues Perspective was formed three years ago at Vino Di Sedona by three of Sedona’s most talented and most known musicians, Steve Sandner, Robin Miller, and Eddy Barattini. They are playing a special Spring Break show on Sunday March 31, 2-5 p.m. This combined trio has over 100 years of music experience. Steve Sandner has had a lifelong interest in the blues since sitting in with the James Montgomery Blues Band in Ann Arbor in the 60’s, and he also played with the J Geils Blues Band in Boston before their rise to pop fame.

The amazing Tim Young moves to Music Monday. This singer-songwriter and guitarist plays upbeat music that you can tap your feet to on April 1, 6-9 p.m. Before moving to Sedona, Tim had a 30-year music career in New York City where he performed hundreds of shows and released three CDs. He was raised in the heyday of AM top forty radio and the Folk music boom, his inspirations are everyone from Bob Dylan, Joan Baez, and Arlo Guthrie to The Beatles, Sex Pistols, Ramones, Cars and Nirvana.

Vino Di Sedona Fine Wine and Craft Beer is located at 2575 W SR 89A in West Sedona. For more information or to see the full calendar of events, visit VinoDiSedona.com. 928-554-4682.