Q&A with Verde Valley Teacher of the Week Reanna Byrd 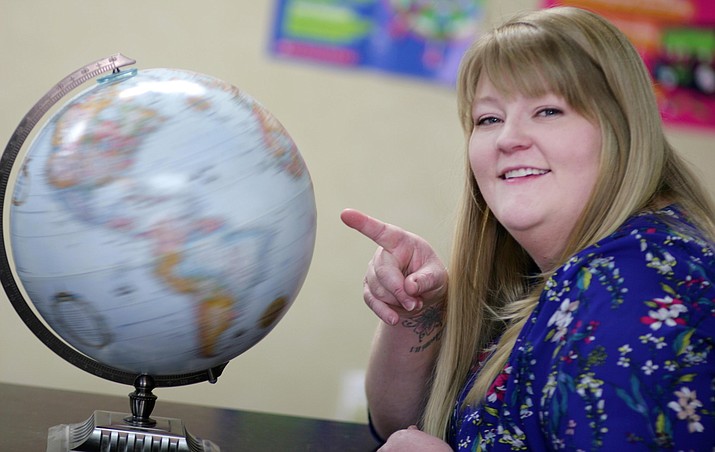 Having her students move around the classroom, as well as interactive learning are big parts of Reanna Byrd’s teaching style. VVN/Bill Helm

Charged with teaching middle school history and language arts, the Camp Verde United Christian School educator grew up as a teacher’s daughter and would spend the end of each summer helping teachers prepare for the upcoming school year.

“This is when I realized I wanted to be a teacher,” Byrd said.

As the school’s principal, Kathy Holden said recently that Byrd’s strength as an educator is her “great compassion and care for her students.”

“Students know that Mrs. Byrd cares about them, and they reciprocate that affection,” Holden said. “Mrs. Byrd comfortably and genuinely shares her Christian faith. She diligently seeks the best path for learning and knows her students’ strengths and challenges. She wishes all students to succeed.”

For Byrd, “getting the kids out of their seats” is important.

“Moving around the classroom and interactive learning are a big part of my teaching style,” Byrd said.

If there’s anything that Byrd doesn’t like about teaching, it’s that her students will eventually move on to the next grade.

“Especially after getting to know them so well,” she said.

Verde Valley Newspapers: What do you like most about teaching?

Reanna Byrd: “I love getting to know the students and developing a relationship with them.”

VVN: Tell us something notable about your career.

Byrd: “I enjoy music and play the piano. I lead the middle school chapel praise team for worship.”

VVN: What excites you about teaching?

Byrd: “I get a thrill when students express their enjoyment in learning.”

VVN: Tell us something about you that people may not know.

Byrd: “I have my license in cosmetology and worked in that field for a few years.”