Back to the Old Salt Mine: Camp Verde’s Salt Mine may have been first mined 2,000 years ago 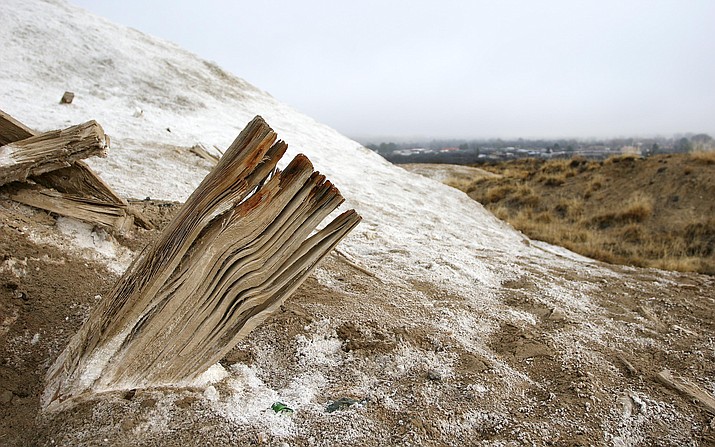 The Camp Verde Salt Mine ceased operations in 1933. What remains, a few pieces of lumber sticking out from large piles of salt – and clay. VVN/Bill Helm

The origin of the Camp Verde salt deposit can be traced back to massive volcanic events some 13 million years ago in the Hackberry Mountain and 13-mile rock volcanic center about 12 miles southeast of present-day Camp Verde.

During this time, of massive geologic upheaval, much of central Arizona was faulted into deep basins and high ranges.

The deep basins captured eroded materials from the neighboring mountains and the southern limit of the Verde Valley was blocked by a massive volcanic flow and continued volcanic eruptions added more material to this natural dam.

This basin captured materials and water and held it like a huge lake.

Seasonal periods of acute dryness led to the evaporation of the super-saline waters and essentially left behind the salt and gypsum as layers within the Verde Valley sediments.

The volcanic dam that blocked the southern end of the Verde Valley eventually eroded and normal drainage was achieved.

CAMP VERDE – Not only is Camp Verde’s Salt Mine one of the oldest known mines in the United States, some experts believe that as long as 2,000 years ago, the site was likely worked for its chief resource.

That’s what the primary outreach project of the Hudson Institute of Mineralogy said about one of the community’s most unique sites.

A 501(c) (3) not-for-profit organization, Mindat.org, claims to be the world’s leading authority on minerals and their localities, deposits and mines worldwide.

According to Mindat, rare artifacts have shown that the mine was worked for salt “at least before the arrival of Columbus in the 14th and 15th centuries.”

With Camp Verde’s first Anglo exposure in 1865 – and Fort Verde’s 1871 establishment – the Feb. 17, 1872 edition of the Weekly Arizona Miner reported on a “mountain of salt” in Camp Verde’s Copper Canyon region, about 40 miles east of Prescott.

Talking of “specimens from a mountain of salt,” the unnamed reporter stated “we learn that several persons have gone down to look at the salt deposity (sic), the existence of which has been known to several persons for some time past.”

A Mr. Richards, who worked as Camp Verde’s post trader at the time, is said to have “forwarded specimens” of the Salt Mine “to San Francisco where it was tested and, of course, pronounced to be just what it was and is.”

But Richards, as the Miner story goes, thought the sample had “no value.” Until a Lt. Wheeler and an unnamed geologist reported otherwise.

“Sinking upon the deposit has proved that the salt is purer below than in the shell … its discovery is hailed with delight by our people,” the Miner reported. “When the time comes, as come it will, when thousands of bushels of salt will be required yearly, in the treatment of base silver ores, cheap salt will be a desideratum – not to be sneezed at.”

In a June 1971 story for Gems and Minerals Magazine, James E. Snyder, Ph.D, wrote that the Salt Mine was formed in the late Miocene and early Pliocene times when the “south-flowing Verde River about six miles south of Camp Verde” was blocked by lava flows and debris from volcanic activity.

“With no outlet, the lake became saline, deposited gypsum and other salts which with limestone and gravels made up the Verde formation of today,” Snyder wrote.

Dr. Snyder’s article was about mineral collecting in Arizona, and “to clear up existing confusion on identification of Verde glauberite and its pseudomorphs and to alert future visitors to the area to look for the different varieties.”

“The Salt Mine has long been a favorite collecting area for rockhounds,” he said.

A Camp Verde resident, Bill Morris, was one of those rockhounds.

In the early 1980s, Morris and his family “enjoyed travelling to – and camping at – some of rock collecting sites described in the rockhounding guides available at the time.”

Morris recently recalled one of those trips – to the Camp Verde Salt Mine – in search of Halite crystals.

Though he didn’t find any of the “huge specimens” he learned about from the guide books, the Morris family did bring back “a sufficient sample” for his school-age daughter to prepare for her class science project.”

“I think at the time we could enter the mine part way to collect samples,” Morris said. “But I’m not sure if that was the case or a fig newton of my 76-year-old imagination.”

Morris is one of several members of Camp Verde’s historical society. Each Tuesday from about 10 a.m. until 4 p.m. – times vary from season to season – the group’s members take on several roles geared to keeping the town’s history alive.

Something as innocuous as having lunch can be a veritable treasure trove for the five senses, as several of the community’s historians swap stories of times gone by – and sadly, of people gone by.

Recently, society members recalled a man called Jim Derrick, who once worked at the Camp Verde Salt Mine. As Vada Lovato told the story, a mule named Hett slipped and pinned Derrick against the wall of the mine.

“The mule remained calm and still until Jim worked his way out, and then she righted herself,” Lovato said.

Due to the mule’s “calm demeanor,” both the two-legged and four-legged beings left the scene unscathed.

Nancy Floyd also told a Salt Mine story that involved not one mule, but several mules that were tasked with puling loaded wagons. She remembers being on a historical trek of the Salt Mine with local historian Bill Cowan.

“There was an elderly gentleman there that spoke of when he worked at the Salt Mine when he was young,” Floyd said. “I’m sure he is no longer living, but his stories are still with us.”

According to Floyd, the man said his first job “was to handle the team of mules pulling a wagon that was loaded up, and would then be hauled to another area to be unloaded.”

“We all got a laugh out of that story.”

A story in the Dec. 21, 1926 Verde Copper News talked of the “considerable time” since the “finding of an ancient skeleton in the sodium sulphate deposit at Camp Verde.”

Of the discovery – according to the publication’s subsequent announcement – geologists, biologists and antiquarians “denied the possibility of such a find, claiming that the remains had slipped down a surface crack and, later become imbedded in the sulphate.”

“The finding of several other traces of human operation of the deposit served to question the correctness of this assertation,” the article stated, “and it now seems certain that our predecessors searched for the rock salt many, many centuries ago and that the skeletons which have been unearthed represent the remains of a mighty ancient occupancy of the country.”

The Verde Copper News also reported in that story that “hundreds of broken stone picks and hammers have been taken out of this working and handles.”

“Most of the relics, including the skeletons, have been sent to the state museum and there’s a cartload of artifacts ready for inspection.”

Thriving economy – until it shut down

In the 1920s, an open pit was operated on the Salt Mine property by the Western Chemical Company. In the late-1920s, and into the 1930s – in fact, the first five years or so after the Great Depression – the Camp Verde Salt Mine “provided a thriving economy for Camp Verde,” said Steve Ayers, author of Images of America: Camp Verde.

According to Ayers, “more than 150 men were working there in the early 1930s, which is totally remarkable.”

But “duty-free and purer German ore” entered the market in 1933, according to Mindat.org, which “essentially forced the closure of the mine.”

Ayers said that “attempts by legislature to impose a tariff to help keep the mine going got no traction.”

Since the 1980s, the Camp Verde Salt Mine has been managed by the US Forest Service when it was designated as a “candidate for interpretation,” Ayers wrote in a report to the Camp Verde Town Council in March 2013.

Ayers, now Camp Verde’s economic development director, has worked since 2013 with the Prescott National Forest to build an interpretive trail at the Camp Verde Salt Mine site.