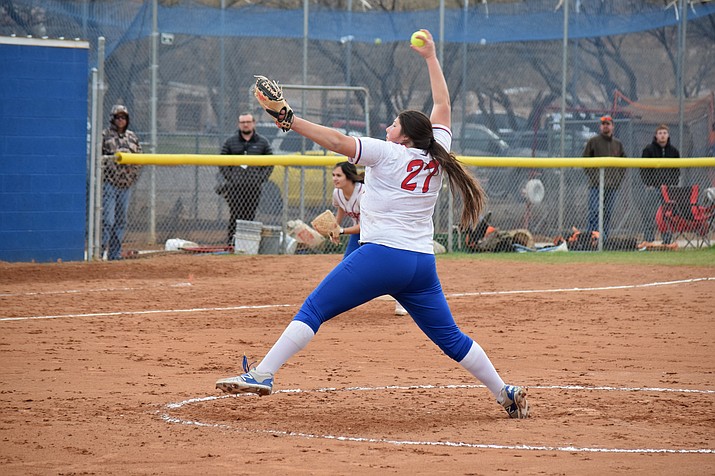 Camp Verde High dropped their first two regular season games of the week but debuted near the top of the rankings.

Camp Verde capped off the week’s action with 5-1 loss at 3A No. 1 Winslow.

Against the Bulldogs, sophomore Cassandra Casillas led the way with two hits and by scoring the Cowboys’ run. Junior Jacy Finley drove her in and in the circle pitched six innings, giving up five runs, nine hits and one walk and striking out seven.

Up next for the Cowboys is a trip to No. 37 Glendale Prep on Tuesday. Their next home game in Apr. 4 when they host Sedona Red Rock for a doubleheader starting at 2 p.m.

Trailing 5-2 heading into the seventh inning, the Cowboys scored three to force extras but the Spartans picked up the walk off win.

Seniors Dominiq Bruno and Dakota Battise each had three hits and senior Dawson McCune had a pair of RBIs. Sophomore Mason Rayburn hit a triple.

The Cowboys travel to No. 44 Valley Lutheran for a game on Monday. Thie next home date is Friday at 3:45 p.m. against No. 21 Sedona Red Rock.

Mingus Union boys tennis extended their win streak to three with a win at Seton Catholic Prep in Chandler.

The No. 16 Marauders bested the Sentinels 7-2 on Friday.

In doubles, Valentine and O’Donnal won 8-6 and the Sentinels forfeited the third doubles match.

The Marauders next play at No. 15 Flagstaff on Tuesday. Their next home match is Thursday against No. 10 Deer Valley at 3:30 p.m.

Their next home match is Tuesday against Flagstaff at 3:30 p.m.