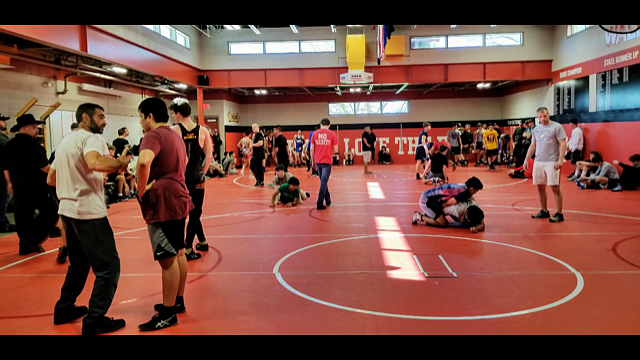 Mingus has built such a great reputation of being a power house, the best competition now travels from afar to attend our “Saturday Weekend Wars” tournaments. On Saturday, April 27, 2019 Mingus Mountain Wrestling sponsored another “Weekend Wars” tournament. Successful involvement in wrestling demands huge sacrifices from the kids and their families.

Some ask, are the sacrifices worth it? Ask that question to our kids attending colleges throughout the United States. Our champions have learned a code of ethics by which to live, to respect the rights of others and to play the game of life as well as the game of athletics. They have won the greatest championship any person could ever win by exploring the fullness and strength that lie within themselves. It has encouraged them to pass through the challenges of that upstream river of life. They now have a desire to excel in all that they do, a motivation to succeed and to pursue the best life can offer.

Some of the most exciting triumphs this weekend, was turned in by 100-pounder Brody Townsend and 85 pound Racer Uhler. Brody as a two-time defending state champion and Racer as an All-Star Saturday Wars team member, both found themselves locked in the mother of all mat wars. They were challenged by much larger foes, who were built solid as a rock. After being tossed and countered at every move by brute strength, These boys quickly changed their strategy, utilizing advanced technique and leverage to earn take downs. In the bottom position, it was quick speed and agility quickly giving them the reversals needed to place them on top. Competing against older and stronger opponents had no affect on their goal to go undefeated for the day.

At 60 pounds, Maple Ogle, a first grader, put on another stellar performance this weekend. Maple’s strength, courage and character are an inspiration to others. She competes mostly against boys and sends them home crying. She is keeping up the tradition of her father and uncles who were champions at Camp Verde. Her performance earns her this week’s Mingus outstanding elementary wrestling award.

At 77 lbs. is Dakota Jeffords, a seventh grader who isn’t the strongest kid in the block but on a wrestling mat those things don’t matter. What he does have is toughness, heart and a drive to improve that has helped him become a true technician. He is a wrestler who can beat you with his skills rather than his athletic ability. Dakota’s commitment to wrestling paid off this weekend, when his mastery of the sport allowed him to plow through the competition. His goal now is to make history and become another of Mingus future state champions.

At 120 lbs. is Ethan Zepeda who although young in the sport has repeatedly proven himself. Ethan is a machine. He wrestles with extremely high intensity and every wrestler that has faced him has commented on how hard he has pushed them. He has been a very hard working wrestler. Ethan is defined by his positive attitude, strong character and engaging personality. He demonstrates determination, generosity, compassion, courage and a strong spirit, all of which will support his efforts of future placement at state.

At 154 lbs. we have Sergio Vasquez who has made several sacrifices in order to improve his mat skills. Our program is aimed to help every student find the champion in themselves, by inspiring and motivating them to be responsible to themselves and to others. This best describes Sergio who has realized his own potential for self-improvement. He is patient and waits for his openings and opportunities. He is a young man with a lot of courage and inspiration. He is looking for his first placement at state this coming season.

At 182 pounds, It looked, for a moment, like our opponent might have the match-winning takedown. However, Tyler Griffin quickly scrambled and applied his lethal double, for a takedown and three back points in the closing seconds. Even though successes in his wrestling and physical attributes should be all that is needed for him to be called a great athletes, however his outstanding work ethic, determination, great attitude and dedication are the real reasons he is accomplishing great athletic feats. These are the undeniable qualities of all the greatest athletes.

At 145 pounds, Dathan Wimer had no intention of laying down! With a gutsy second effort, he changed over into a Peterson and put his opponent to his back, quickly scoring two points for a reversal and three points for near fall. The intestinal fortitude that Wimer showed in battling back seemed to galvanize the Marauders. Another factor in being a great athlete is determination. Great athletes never give up. Great athletes don't even consider giving up. Perhaps, great athletes don't know how to give up or even understand the concept. This best describes Wimer’s performance at Weekend Wars. He is on his way in becoming a future state contender.

At 126 lbs. we have Braden Arnold who took second place. We are very excited to have this caliber of a young man in our program. He is a gifted wrestler, good student and a hard worker. We feel he has all the qualities to help Mingus maintain its level of competiveness this coming season.

Three more of our success stories have to be Elias McKean, Ryan “Gronk” Griffin and Conrad Brady. They have a very calm and stable aura about them. Under pressure they are able to prioritize and keep their ultimate goals in mind. They are some of our top students and work hard every single day. They always participate, are attentive listeners and are not afraid of a challenge. Their enthusiasm and compassion have inspired us all. I believe that their sheer determination for learning will carry them to great success. They earn this week’s most positive attitude award.