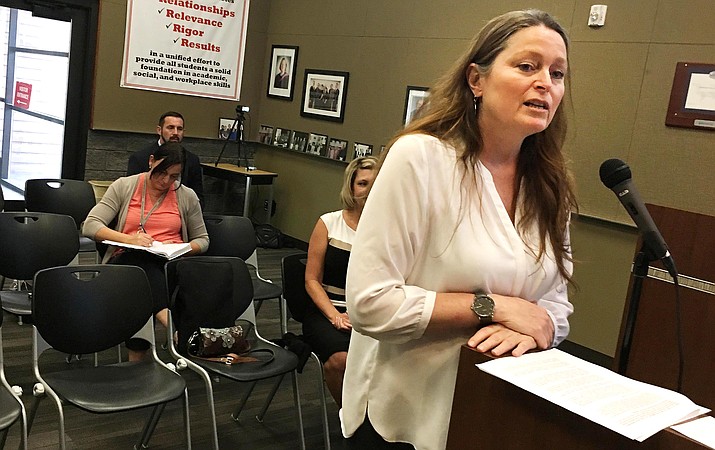 Jennifer Chilton, director of Operational Services for Sedona-Oak Creek Unified School District, tells the governing board Monday about an agreement to lease part of the Big Park Community School campus to the Arizona State Schools for the Deaf and the Blind. The board voted unanimously – 5-to-0 – to enter into the agreement. VVN/Bill Helm

Sedona Oak Creek School Board member Karen McClelland, pictured at right, and her fellow board members voted to lease part of the Big Park Community School campus to the Arizona State Schools for the Deaf and the Blind. VVN/Bill Helm

SEDONA – Sedona-Oak Creek’s decision last year to close one of its elementary schools was met with a great deal of resistance.

Monday, the board voted 5-to-0 to lease the former Big Park Community School to Arizona State Schools for the Deaf and the Blind – ASDB – and nobody from the public as much as said “hold on, let’s talk about this.”

Jennifer Chilton, the district’s director of Operational Services, presented the board with the agreement’s basic structure, as well as the deaf and blind school’s plans leading up to the lease’s commencement, which is scheduled for June 15.

Chilton also told the district’s governing board that she is “looking forward” to the partnership between Sedona Oak Creek and ASDB.

“It’s been a joy to work with them,” Chilton said of the negotiating and vetting process between the two entities. “They’ve been a great team.”

With two schools, one in Phoenix and one in Tucson, the deaf and blind school will move its northern regional cooperative from Flagstaff to the former Big Park campus in the Village of Oak Creek..

Unlike their schools, ASDB created its regional cooperatives to help support students from preschool through 12th grade “who are deaf, hard of hearing, blind, visually impaired or deafblind” in the general education classroom within their public school setting, according to the ASDB website.

According to Chilton, the deaf and blind school will “provide necessary and excellent educational services to schools throughout this northern region.”

“This is a rare example of a truly win-win agreement, as the public funds allocated for leasing the satellite location for ASDB regional service providers, in this way, stays within public education further supporting students,” Chilton said.

The deaf and blind school first reached out to Sedona-Oak Creek in October about moving its northern regional site, Chilton said.

After a November tour of the campus, ASDB “renewed the discussion of possible rental,” Chilton said. In early March, ASDB confirmed Big Park as its desired location choice.

Founded in 1912, the Arizona State Schools for the Deaf and the Blind operates two schools for the deaf, one school for the blind, a statewide birth-to-three early childhood and family education program and five regional cooperatives which provide services to students attending a local school.