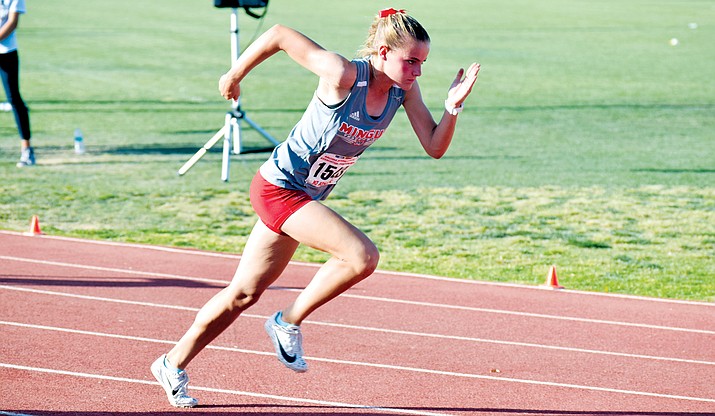 Mingus Union senior Kendrew Streck closed out his Marauder track career by defending his state championship in the shot put and also claiming the 2019 state title in the discus. VVN/Dan Engler

MESA — Mingus Union head track and field coach Molly Westcott is an English teacher but she was at a loss for words to describe the Marauders’ state meet.

“It was great,” Westcott said. “All the kids did really, really well. The girls, I can’t even explain it. It was better than I could have ever expected.”

The MUHS girls finished sixth with 41 points and the boys were ninth with 25 points.

The Marauders capped of the meet with the girls 4x400 relay finishing first in a record-breaking 4:01.95 that was about five seconds better than second place Prescott. 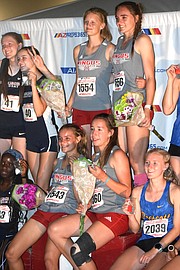 “It’s the absolute best,” Westcott said. “It’s hard to put into words how exciting it is to watch a 4x4 at the end of track meet when it’s your team and you’re winning it and you get the school record There’s just nothing better.”

“It was good that he got the discus championship instead of the third place last year and he did amazing,” Westcott said. “He’s gonna do incredible things.”

“Amazing, it’s another thing that’s really hard to put into words but she exceeded everyone’s expectations this year,” Westcott said. “She led her team and had as perfect of a senior meet that she could have had.”

“Honestly, Natalee really surprised all of us,” Westcott said.

After bringing back pole vault to MUHS for the first time in years, three Marauders made it to State. Senior Drake Ortiz took 11th (12-03.00) while junior Joelle Santiago took fifth and freshman Alexandra Carey was 11th.

“It’s been so cool, someone just asked about it, someone that I hadn’t talked to in a while and they said ‘you have pole vaulters?’” Westcott said. “And yeah, we brought three of them to State, which is awesome, so we’ll have some more next year and hopefully get some points from them next year.”

Junior Andrew Peterson was 11th in the high jump with a leap of 6-00.00. Cassidy Vergara was 20th in the triple jump and Carey was 21st.

Senior Lindsey Jones took ninth in the shot put and 19th in the discus.