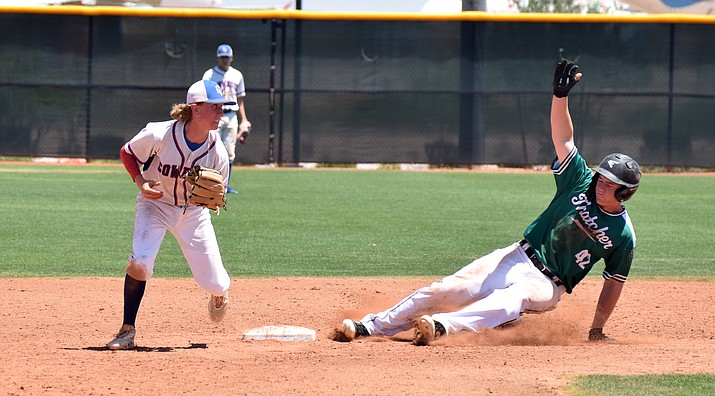 Camp Verde senior Dakota Battise forces out an Eagle during the Cowboys’ 7-4 win over Thatcher in the state tournament on Saturday in Goodyear. VVN/James Kelley

Camp Verde sophomore Mason Rayburn pitches during the Cowboys’ 7-4 win over Thatcher in the state tournament on Saturday in Goodyear. VVN/James Kelley

After a perfect start to the state tournament, Camp Verde High baseball is one win away from the state championship game.

The No. 5 Cowboys face No. 1 Scottsdale Christian on Friday at 6:30 p.m. at the Cleveland Indians Spring Training facility at Goodyear Baseball Complex.

“I think it’s been pretty exciting town wise,” CV head coach Will Davis said. “I haven’t heard much from anybody other than ‘see your Friday’ so I think we’ll have a pretty good fanbase there.”

Although the Cowboys came into the postseason on a roll, senior Dakota Battise said Camp Verde played better than he’s ever seen them perform in the first two games of the tournament.

“We came out fired up and ready to play and came out on top,” senior Dominiq Bruno said. “Honestly I don’t know where this level of baseball has been all year but we came out to play out of nowhere so it really worked out.”

The Cowboys secured the Central Region championship and have won 11 games in a row. CV’s last loss was in March at Northland Prep but they avenged that defeat a few weeks later.

The Cowboys opened the tournament by beating No. 12 Miami 10-4. The win avenged their 2017 loss to then No. 13 Miami in the first round. Camp Verde was ranked fourth at the time.

“It felt really good,” Bruno said. “They felt they were going to come out and beat us again but our team this year we’re practicing a lot harder and work a lot harder than we did my sophomore year.”

Then in the second round the Cowboys upset No. 4 Thatcher 7-4.

“I felt like we were ready for postseason play coming in,” Davis said. “I knew the Thatcher game was gonna be tough, most of the breaks went our way, which is what you need in the playoffs because every team is good and every team can win on any given day and I feel the same Friday. They may have the upper hand coming in but if things go our way and we play a little better than them that day, we can certainly win that game.”

Although both games conflicted with the Camp Verde softball team’s first two state tournament games the Cowboys had strong support, arguably the most of any of the baseball teams at Goodyear.

“Yeah it was great, we had a lot of fans there on Friday and Saturday, so that was pretty exciting to see, everybody out supporting the young men,” Davis said.

They may need the extra support for Friday’s game against Scottsdale Christian. The Eagles won the Metro Region championship and went 15-1 in power point games this year.

“Don’t know a whole lot about them,” Davis said. “We saw their best pitcher last year when he was at Joy Christian and we actually played them last year, so a lot of the kids are interchangeable but they are a travel ball, club type team where all these kids play pretty much year round so we know they’re gonna be sharp, they’re gonna be good and we’re going to need to play our best to win.”

Although the weather limited their practice on Tuesday and on Wednesday they worked out in the gym, the Cowboys started the week with a good practice.

“We made it through most of yesterday before it rained us out, so we got an hour, hour and a half in (Tuesday) so we didn’t get a lot in (Tuesday),” Davis said. “Monday’s practice was good, everybody had high energy, excited to still be playing and still be practicing. So yeah so far what we’ve been able to get in has been really good."

Everyone from seniors like Battise and Bruno to sophomores like Peyton Kelley has contributed to the win streak.

“Really from freshman class, Cole Gillespie’s helped out a lot and then the sophomore class with Mason Rayburn has helped out a lot and then other than that it’s most been juniors and seniors but Peyton coming in and playing big in a spot where he probably didn’t expect to was really cool for the team and the younger guys getting the experience will be huge for next year,” Davis said.