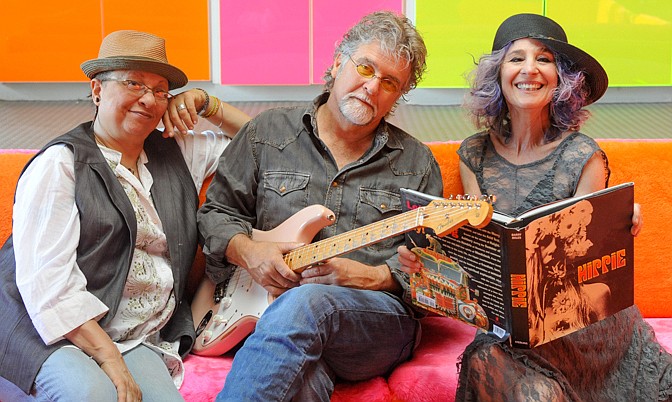 Sound Bites Grill welcomes back to the music stage an exciting two nights of fabulous music with Jay Boy Adams and Zenobia, (Santa Fe) featuring Trixie Merkin (electric bass) and Josh English (drums). This show is happening on Friday, May 17, and Saturday, May 18, 7-10 p.m.

Jay Boy Adams has been busy preparing to record a new CD, producing other artists, and performing regularly. He has half of the songs picked for the new CD, which will be out in 2020.

The band first came out last year when their good friend and artist Bill Worrell was in Sedona for Exposures art show. Sedona and Sound Bites Grill welcomed them and the relationship continued to grow from there.

“We love Sound Bites Grill. It’s a great room and this is our third time back. We are looking forward to the show this month,” said Jay Boy Adams.

Jay Boy Adams has toured with ZZ Top, Stephen Stills, and many other well-known artists. Zenobia, Jay Boy’s music partner, has performed on Broadway, in the Kansas City Repertory Theatre’s critically acclaimed re-imagining of Hair. She was also Luther Vandross back-up singer, among others. Jay Boy and Zenobia’s home base is in Santa Fe.

Jay Boy Adams spent a number of years honing his craft playing in bands in Houston and then in Midland, Texas with noted bluesman Johnny Heartsman.

In 1972, Adams landed an opening slot in Lubbock for ZZ Top, whose manager, Bill Ham, was impressed enough to recruit Adams as the group’s regular opening act.

After four years on the road with ZZ Top, Adams hit the touring circuit in earnest again for the next six years, sharing concert bills with such artists as the Allman Brothers Band, Joe Cocker, Jackson Browne, Marshall Tucker Band, Bonnie Raitt, The Kinks and many others.

Throughout the 1970s into the early ‘80s, Adams spent some 200 to 250 days a year on the road. But the grind of touring and pursuing his musical ambitions eventually took their toll, and he was also intent on being a good father and husband. So he put his guitar down, left the road and quit music.

Country star Lee Roy Parnell invited Adams to join him onstage at a show in 1997, and his songwriting muse and love for playing guitar and performing returned with a vengeance.

He has since toured on George Strait’s 1999 Country Music Festival, headlined the Kerrville Folk Festival and also toured Europe as a special guest star with The Texas Tornados.

Jay Boy Adams is now touring with Zenobia and has the great pleasure of having a fantastic band! Check out jayboyadamsandzenobia.com to learn more about the band.

Doors open at 5:30 p.m. for dinner and the show begins at 7 p.m. Tickets start at $10 depending on seating. There will be a small dance floor.

For more information and tickets call 928-282-2713 or visit soundbitesgrill.com