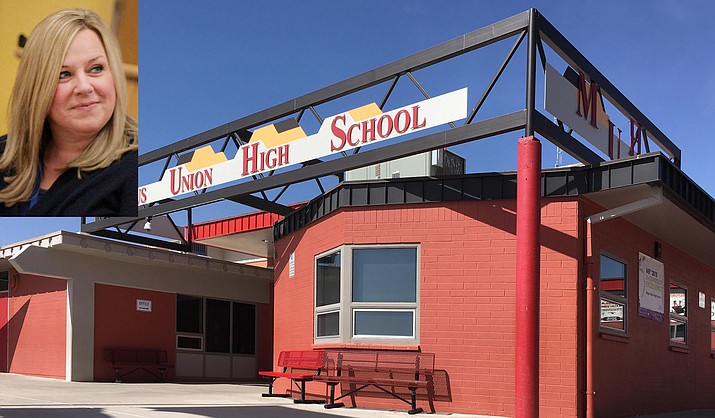 Genie Gee: “When I was asked by the previous school board to serve as acting superintendent, I accepted because I wanted to take care of our school and keep operations as cohesive as possible. I never had any intention of giving up my role as the principal.” VVN photo

On June 30, Gee will only occupy one office on campus – that of the school’s principal.

At the district’s May 7 meeting, Gee told the Mingus Union School Board that she “has no interest in continuing” as acting superintendent beyond June 30, according to the meeting’s draft minutes.

“When I was asked by the previous school board to serve as acting superintendent, I accepted because I wanted to take care of our school and keep operations as cohesive as possible,” Gee said. “I never had any intention of giving up my role as the principal.”

Gee also said that she “look[s] forward to giving my full attention to my role as principal.”

“I am honored that the school board asked me to serve as superintendent and I am thankful to the Mingus team for supporting me throughout the year,” Gee said. “I’m grateful I had the opportunity to serve as the acting superintendent because it opened my eyes to the greater workings of a school district and the importance of thoughtful decision-making.”

Gee said that she “do[es] see myself serving as superintendent one day.”

“But for now, I want to continue to build wisdom and develop systems, structures, and opportunities for the high school,” she said.

Superintendent search is on – again

Whether to look for the district’s new superintendent internally, externally, or both, was discussed at length by the Mingus Union School Board.

In the end, the board agreed – with a 5-to-0 vote – to commence its superintendent search by advertising internally immediately, according to Mingus Union School Board President Lori Drake.

“Mingus can then advertise externally,” Drake said. “If needed.”

“This process can be long, and we may not be able to fill this position for several months,” Drake said.

Drake also said that if the internal search is “not fruitful,” the board may continue its search by first hiring an interim superintendent.

“We are in May, and many of the possible applicants have applied for and accepted positions at other schools for the next school year,” Drake said. “We would then be able to start our actual superintendent search in January. If needed, we could also hire a search firm.”

Gee’s replacement will be Mingus Union’s 14th superintendent in the past 19 years. She replaced Penny Hargrove, who served as the district’s superintendent for less than 17 months before she resigned on Nov. 8 while on administrative leave.