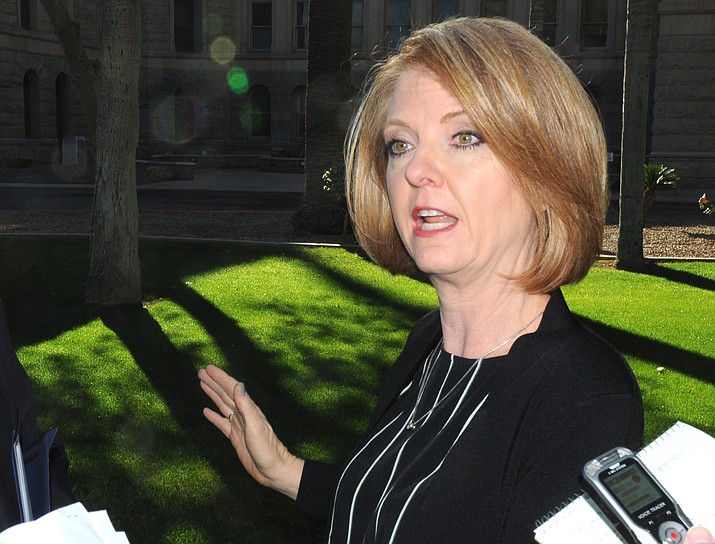 PHOENIX -- Siding with retailers, the state House voted Wednesday to at least partly preempts cities and towns from enacting their own rules on the sale and marketing of tobacco and vaping products.

The preliminary approval of SB 1147 on a voice vote came after Rep. John Allen, R-Scottsdale, who is working with the vaping industry, agreed to some last-minute changes designed to blunt opposition.

Most notably, it would allow communities like Tucson and Tempe to keep their existing regulations on the sale of these products. But they would still be forbidden from enacting anything more restrictive.

And other communities that wanted to license and regulate retailers would be forbidden.

It does contain provisions allowing for some new local regulation, not of how vaping products could be sold at stores or in vending machines which SB 1147 would prohibit, but of where people could light up. So while state law already prohibits smoking in public places, SB 1147 would allow cities, towns, counties and school boards to decide they don't want to allow vaping in public places, government buildings, parks or publicly owned stadiums.

But Rep. John Allen, R-Scottsdale, who is promoting the legislation, said the big selling point is that it would set the minimum age for purchase of tobacco and vaping products at 21. And the fine for underage possession would be a minimum of $100 or 30 hours of community service.

By contrast, HB 2357 which gained unanimous Senate approval earlier this month would leave the age for both at 18.

Sen. Heather Carter, R-Cave Creek, who is behind that plan, said she and her allies at the American Cancer Society would like to raise the age for smoking and vaping to 21. But she said it can't come at the price of letting "Big Tobacco, which now owns Big Vape'' -- some tobacco firms have bought into vaping companies -- define its own rules and block the kind of regulations that she said have proven more effective than existing state tobacco laws at preventing youth use.

Her approach would subject retailers to the same restrictions on getting ID from buyers and limit how close tobacco and vaping retailers could be to schools. It also would automatically extend to vaping products the existing ban on smoking in public places, including restaurants and near the entrance of public buildings.

And Brian Hummel, lobbyist for the American Cancer Society said HB 2357 has a broad definition of what are vaping products. He said that is designed to ensure that the industry does not exploit what he said are loopholes in SB 1147 to market new kinds of nicotine-delivery devices that would escape state regulation.

Some cities like Tucson not only license retailers but can suspend their license to sell tobacco products if they're found to have sold to anyone younger than 18. And Cottonwood makes selling tobacco products to minors a crime punishable by up to six months in jail.

As an example, she cited an incident in Maricopa County last month where flyers promoting vaping products were being placed on cars in a lot across the street from a high school. SB 1147 would allow local restrictions only if the government agency actually owned the land where the cars were parked.

"You want to have a market where you can do business,'' he said.

"The retailers are saying, 'I don't want to have to pay $900 or $1,000 per store in one district to sell tobacco products and nothing over here,' '' Allen explained. And he complained that the Carter bill, while leaving the statewide minimum age for purchase and use of these products, preserves the right of communities to set it at 21 -- or even higher.

"How do you train employees?'' Allen asked. "How can you patchwork-wise run your business if in every jurisdiction you have different rules?''

Allen told colleagues there's another reason they should favor his approach.

He said Carter's bill would pave the way to taxing vaping products like tobacco. And from his perspective, that means not just the liquids that are vaped but the devices and even the batteries that power them.

"It's clouding the issue with a giant cloud of vape,'' Carter responded, saying nothing in her measure raises any new taxes on vaping devices. Allen, however, is not convinced.

"They add the definition to the area (of the law) which is taxed,'' he said.

"It's been made clear to me by some of her supporters that is what they want,'' Allen said. "Some of the health groups are saying, 'What we really need to do is tax this out of existence.' ''

And Hummel acknowledged that his organization would support new taxes on vaping products.

That still leaves the question of whether raising the age to smoke or vape to 21 is worth the trade-off of preemption of some local regulations.

The problem is political. Carter introduced SB 1363 which would have raised the age for smoking or vaping to 21. It did not even get a hearing.

That leaves Allen's bill. And he said those who want to deal with teen vaping and tobacco use should jump at the chance to raise the age of purchase and use to 21.

The measure also includes some new requirements for warnings about the fact that vaping products "may contain nicotine'' and are not intended for anyone younger than 21 or women who are pregnant, may become pregnant or are breastfeeding. And it also clarifies that the new requirement to be 21 does not apply to anyone who is an active or former member of the armed forces.

SB 1147 still needs a final roll-call vote before going to the Senate for consideration.

In the meantime, an aide to House Speaker Rusty Bowers said his boss has not decided whether to allow a vote on the Senate-passed HB 2357.