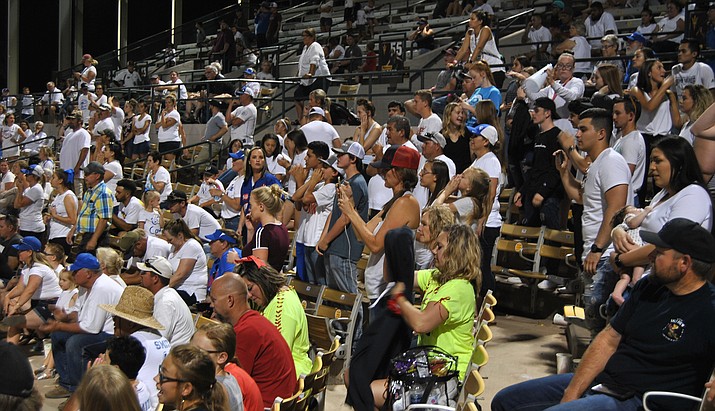 Most of the action for Verde Valley high school sports team this spring postseason was at multi field complexes.

However, in order to find where Camp Verde or Mingus Union were playing, you didn’t need to open your phone and check the AIA website or wander around Rose Mofford, you just needed to find the biggest crowds.

Full disclosure: I didn’t count the fans at the games or check with the AIA to see if they had attendance figures but the difference was so stark that I can confidently say that the Verde Valley teams had the most fan sport at CV baseball and softball games and Mingus Union softball games. Not only were they loud but they wore Marauder or Cowboy gear.

This isn’t a new phenomenon, in the fall the Mingus Union swimming supporters were the loudest at the state meet and I’m pretty certain Marauder football fans out numbered Bradshaw Mountain supporters at their own stadium in the playoffs but the support seemed even bigger this spring.

It started with the Mingus Union softball team’s first round game. It was on a weekday afternoon unlike last year’s first round game, which was on a Saturday. Plus they played a Tucson team this year, not nearby Coconino, so almost all those fans were from Verde Valley.

Then it continued in Phoenix when I saw CV softball in the first round. It felt like I was in Camp Verde still.

Plus the team they played only had four fans at the start of the game and they were from the Phoenix area. Now Phoenix fans aren’t known for being all that supportive at any level and it was a charter school, but yikes, their parents couldn’t leave work early one day?

Then out in Goodyear it was easy to spot where the Camp Verde baseball team was playing because there was a mass of blue around their field. This support continued through the second round and the semifinals for both baseball and softball.

Then when the 4A softball tournament shifted to Phoenix, the Marauder fans drove down there. Even though these were bigger schools from softball hotbeds Tucson and Phoenix playing at the complex at this time and there weren’t many charter schools if any, Mingus Union still had the most support.

“Fan support’s been great all year but it’s getting bigger, everybody’s growing, everybody wants to see winners play, so it’s fun, the girls are enjoying it, there’s a lot of energy that they bring,” Mingus head coach John Brown said after their first game in Phoenix.

There was so much overall support at the 4A games that I had to park over by the soccer fields after parking close for 2A and yet Mingus fans still won.

But the most impressive showing for the Verde Valley fans came in the 2A state championship game. Since they moved the 4A game to Tucson, the crowd was only there for the 2A contest and it was crystal clear who had the most fans.

“It was great, I think that helped us a lot with keeping the momentum going and starting us up again,” CV junior Jacy Finley said.

The crowd was much louder than last year’s title game and at times it felt like Benson didn’t have any fans.

“I’m standing at shortstop and it’s just echoing in my ears and it was just so cool to have that much support,” CV senior Rachel Stockseth said.

Verde Valley teams did very well this spring but so did their fans.