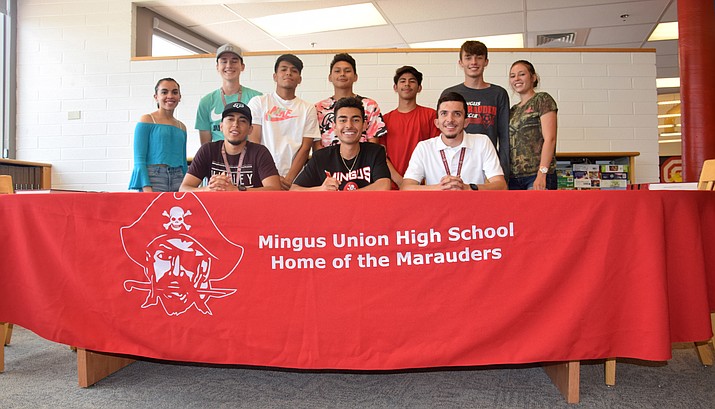 Mingus Union soccer senior Jovany Garcia-Hernandez’s dream has been to move onto the next level and now he is.

“Everything that I’ve did led up to this moment in my life,” Garcia-Hernandez said. “I started playing soccer when I was five years old; everyone that helped me, I really appreciated. My coaches, my family, everyone, my friends, they all supported me through out this journey and this is what I wanted. Hopefully I can go up even to the next level, semi pro or pro, that’s what I’m trying to do right now.”

“It’s something he’s been pursuing for a long time, so just knowing that he’s finally signed, amazes me,” Hernandez said.

Arizona Christian is a non-denominational school with about 820 students. The Firestorm competes in the NAIA and went 15-5-2 this year, reaching the national tournament.

“The school’s growing and it’s growing really fast and he has a lot of potential, a lot of skills to bring towards the school,” Hernandez said. “They’re looking for a midfielder with good touch and that’s what he has.”

Garcia-Hernandez said he chose ACU because of his desired field of study, the strength of the program and a familiar face.

“I wanted to study criminal justice and my friend Isaac is going there too so I wanted to be close to someone that I know at a school that I’m not really used to I also wanted to play for a good school with a good team,” Garcia-Hernandez said.

“It’s pretty nice, we’re both going to put in a good word for any of our friends going down there,” Garcia-Hernandez said about the new Mingus Union to ACU pipeline.

This season Garcia-Hernandez led the Marauders in points and also had the most assists.

“He’s just a really smart player, he’s really intelligent, his work ethic is really high,” Hernandez said. “I don’t exactly where he’s going to placed there but I know he’s gonna give it his all and he’s going to give everything the school really needs.”

The event was also special for the first year head coach, to see one of his players move onto the next level and someone he knows well fulfill his dreams.

“I’ll remember this for the rest of my life,” Hernandez said. “I’ve known him my whole life, so he’s grown a lot (laughs). He’s gone through so many ups and downs and still manages to stay up top I’m proud of him.”