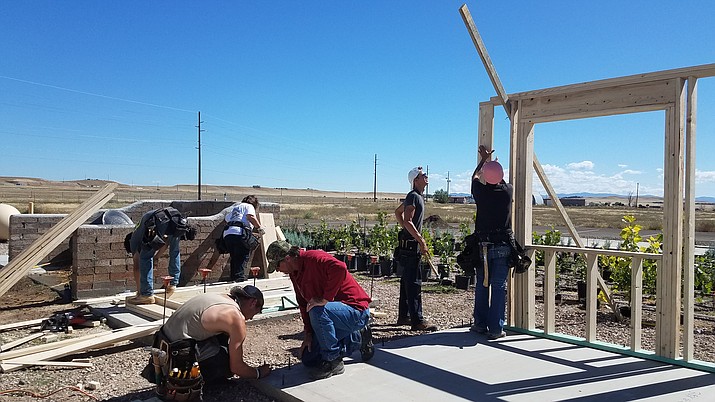 fueled partly by a strong construction sector, average Arizona wages are being driven up by a 12 percent increase in the average salaries being paid by manufacturers. VVN file photo

PHOENIX -- Arizona added another 75,300 private sector jobs in the last year -- with more than one out of every four of them being in the construction industry.

But Doug Walls, director of labor market information for the Office of Economic Opportunity, said Thursday this is not an indication that the state is headed back to the days of the last decade when dependence on construction -- and home building in particular -- left the state particularly susceptible to recession.

The strong construction growth, both in the past month and past year, was enough to drop the state's seasonally adjusted unemployment growth in April to 4.9 percent, down a tenth of a point. At the same time the national jobless rate dropped two-tenths of a point to 3.6 percent.

Most of the state's economic sectors showed job growth. But it has been the construction industry that is exploding.

What makes the growth in that sector noteworthy is that, prior to the recession, one job out of every 11 in the state was in construction. So when the real estate bubble burst and the bottom dropped out of the economy, Arizona was particularly hard it, with the jobless rate topping 11 percent.

There are just 175,100 people employed in construction. That compares with the pre-recession peak of 247,500.

And construction jobs make up just 6 percent of total employment, not 9 percent as it did in 2006.

But Walls said there are other indications that Arizona is not once again setting itself up to have the economic rug pulled out from underneath it.

It starts with a pent-up demand for housing.

Homeowner vacancy rates -- the number of unoccupied single-family homes -- is at 0.8 percent, a figure not seen since 2006. It rose as high as 4.6 percent during the recession.

Ditto on rental vacancies which are down to 4.3 percent, versus nearly 19 percent in 2009.

Then there's the fact that the number of building permits for residential housing has remained relatively steady for the past two years.

"You just drive around the Valley, you'll see a lot of the construction going on," Walls said.

Then there's the fact that developers generally are not doing what they did before the recession: building a lot of homes "on spec" with the presumption that the buyers will come later.

Finally, said Walls, indications are that lenders are not loosening up their lending standards.

Part of what happened during the recession is people took out loans, both in new mortgages and refinancings, that they could not afford to pay. That was only exacerbated when the bottom dropped out of the housing market and people defaulted and abandoned their homes when they found they actually owed more than the property was worth.

"Lending standards remain quite high," Walls said. "So those are all good signs that this is organic growth and less speculative within the construction industry and what we've seen in the past."

Elsewhere in the state economy, growth in retail trade employment remains anemic, adding just 1,100 jobs in the past year as the industry continues to face heavy competition from online retailers. The clothing and accessories sector was hit particularly hard, with employment there down by 700 in the past year.

Manufacturing continued to add workers, up 600 last month and 6,800 in the past year.