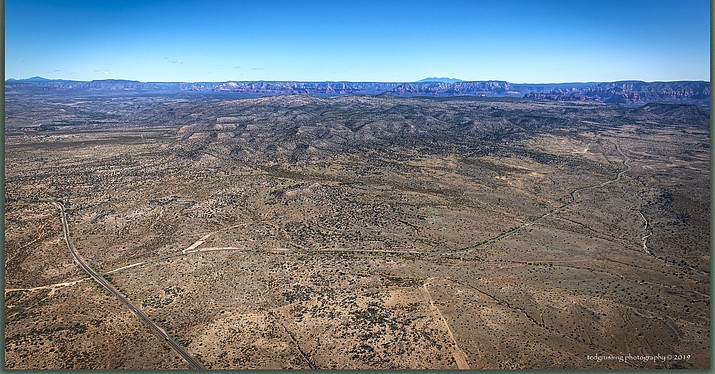 Yesterday I spent about an hour and a half photographing House Mountain, an ancient shield volcano in the Sedona area. It encompasses most of the area bounded by SR 179 on the north, 89A on the west, Cornville Road on the south and Beaverhead Flat Road on the east.

I took shots at various altitudes and from every compass degree going around the mountain. The lava flows from the caldera flow towards the west, south and east, but on the north side it abutted the red rock formations and is thought to have been a part of the Mogollon Rim at the time it erupted some 15 million years ago.

The view from the north looking south clearly shows a lack of lava flows and abutment to the red rock formations … the Schnebly Hill formation I believe. It is also believed that the rim was not the well-defined cliffs now associated with the rim, but rather a more gentle slope. Millions of years of erosion has done a profound job of sculpting the landscape and the rim has retreated about five miles to the north from the days that House Mountain erupted.

The caldera can be seen as kind of a shallow V just left of center about a third from the top. Page Springs is the intense green area on the left side of the mountain and Oak Creek flows through there.

The lava flows have been eroded too, but you can see where they are. On the horizon right of center are the San Francisco Peaks, below them on the right side is Wilson Mountain and below it and just above House Mountain you can see the Sedona airport and just to the right of that the top of Cathedral Rock. The Village of Oak Creek is below the mountain crest to the right of Cathedral Rock … it backs up to House Mountain and on the top of the mountain there you can see basaltic rock from the lava flows above the Schnebly Hill formation. On the left horizon is Bill Williams Mountain and below it the gap looking into Sycamore Canyon and it is flanked on the left by Black Mountain and on the right by Casner Mountain.

The roads … lower left traveling out of the picture at the bottom is Cornville Road and up a bit on the left is the intersection of Cornville Road and Beaverhead Flat Road and Beaverhead Flat Road travels to the right and upwards in the photo for six miles where it meets SR 179 and if you hang a right there, it is about three miles to the Village of Oak Creek.

Anyhow this is turning into a fun project … I have been woefully ignorant of House Mountain … shield volcanoes typically have a low prominence and it has kind of hidden itself from me for many years … perhaps after 15 million years it has shrunk a bit too … I have and I have not been here all that long.

Have a beautiful day and week … keep smiling and breathing.

A bird flies through the sky, and I fly with it. I am each pearl of moisture sparkling in the sun.

I lie lazy on the clouds. And I acknowledge my kinship with each winged thing.

I see all as one, and nothing repels me, as this new day climbs noiselessly out of the valley of the night.