Cricket’s Dessert and Sandwich Shop to close after 35 years 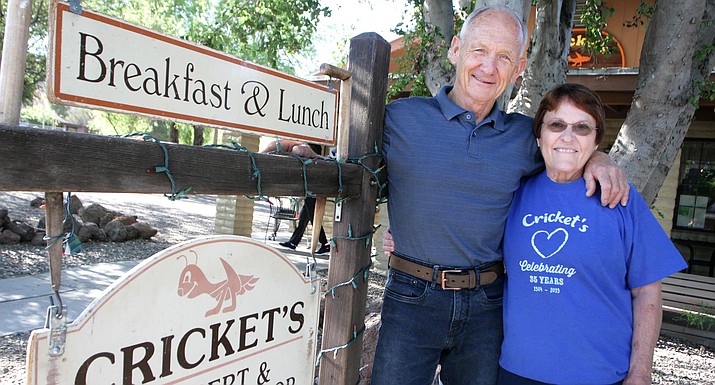 On May 25, Ralph and Kay Nye will close Cricket’s Dessert and Sandwich for the last time. The Nyes first opened the shop in 1984. VVN/Bill Helm

LAKE MONTEZUMA – Kay and Ralph Nye will celebrate their 50th wedding anniversary on May 25.

They’ll also close the doors at Cricket’s for the last time.

After 35 years operating the community’s dessert and sandwich shop, the Nyes are ready to do what other couples their age are doing.

“We want to travel, and we want to have fun,” Kay Nye said Monday. “We have our cabins I want to go to.”

The Nyes have a roughly two-week trip to Colorado planned that begins the day after Cricket’s last day. After that, their immediate plans involve Kay and her best friend and co-worker Grace Lahr walking their dogs – apparently their dogs are boyfriend and girlfriend – and Ralph tinkering with his 37 telescopes.

Normally, the couple is up at 4:30 a.m. Tuesday through Saturday, as Ralph gets ready to work his “hobby” as Director of Technical Services at Lowell Observatory, Kay plans a day at Cricket’s, where not only does she cook breakfast and lunch, but she also bakes cinnamon rolls, bear claws and other sugary delectables.

Not only will Beaver Creek’s finest – known as Creekers – need to find another place to eat, but the Nyes will need to learn to shop for food for just the two of them.

“We remodeled our kitchen 20 years ago,” Kay said. “And it still looks brand new.”

No surprise, since they keep only water, dog food and coffee in the house. 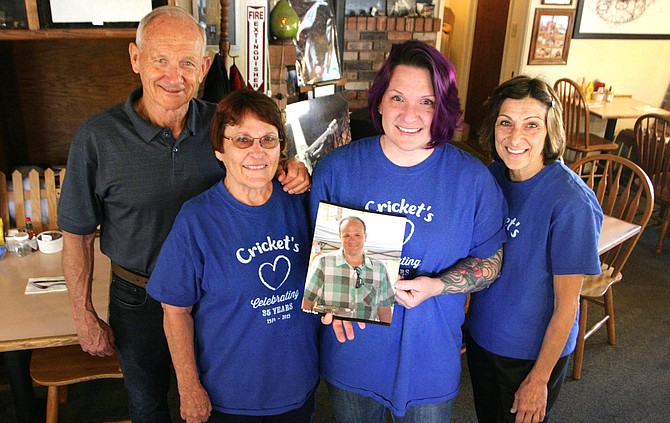 From left, Ralph and Kay Nye, pictured with their daughter Stefanie Lysons and their best friend and co-worker Grace Lahr. VVN/Bill Helm

“We eat here,” Ralph said of the family restaurant.

Cricket’s has truly been a family affair. Their children have worked there; their daughter Stefanie Lysons still does.

Their son Ralph – Ralphy – also worked there. But he passed away five years ago October from heart complications.

“He didn’t like going to the doctor,” Lysons said.

Still brings a tear to their eyes, as the Nyes talked about how he could sell pie to anyone in the restaurant.

“If someone said they were too full for pie, he’d ask, ‘how about a half-slice,’” Lysons recalled. “’You can do that?’ they’d say to him?”

Though she’s owned Taco Bell restaurants in the Verde Valley for years and years, Lahr has been at Cricket’s since 2008. Formerly the chain’s owner/operator at Sedona, Cottonwood and Camp Verde locations, Lahr owns just the Cottonwood eatery now, but hasn’t operated it the past four years.

Retirement didn’t take, she’d probably admit, since she works alongside Kay each day.

With Cricket’s planning its last day, Lahr admitted that not being there for the Beaver Creek community “will be hard.”

“Sure, it will be bittersweet,” Lahr said. “We’ll miss everybody. It’s been like an extended family. But Kay and Ralph have worked so hard for 35 years. They deserve to enjoy life.”