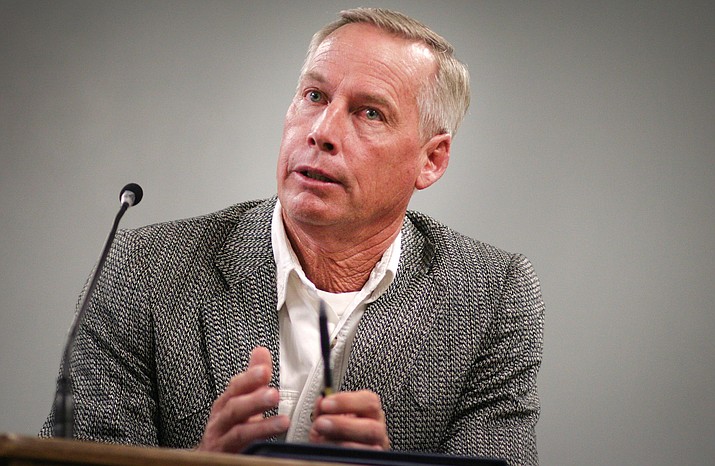 Dugan McDonald of High View LLC, said Wednesday that upon the approval of Camp Verde Town Council, he “should be ready” to break ground “approximately one year from now” on the Boulder Creek development. VVN/Bill Helm

CAMP VERDE – Carmen Howard made it clear Wednesday that Camp Verde’s town staff “does support” Dugan McDonald’s plan to develop 185 acres along SR 260 into a residential and commercial community.

With a 6-to-0 vote, the town’s council also showed its support for McDonald, of High View LLC, who said that “approximately one year from now, we should be ready to break ground.”

A big concern council had as it solicited information from McDonald was whether proper sewage service could be provided to the development, which would be built on the south side of SR 260 just west of the Aultman Parkway roundabout.

Which is fine, he said, because the development – known as called High View at Boulder Creek – would be built in multiple phases.

Camp Verde resident and former council member Brad Gordon told council Wednesday that McDonald’s planned development was “the kind of thing you may need to switch your CIP [Capital Improvements Plan] priorities for.”

“I really support this,” Gordon said.

A project that “encourages a holistic approach” is how Howard, the town’s Community Development director, described Boulder Creek.

“We see this as a potential catalyst to bring development along [SR] 260,” she said. “The 260 project has been planned for development in that corridor. The roundabouts were put there for this kind of use. Any extra [roadwork] would be minor. And the project does correspond with the general plan. Everything is in compliance.”

“These numbers are very preliminary,” Howard said. “They could go up or down.”

The development also includes plans for a 14-acre commercial area McDonald said is “reserved for the placement of a grocery store and a courtyard shopping area for the enjoyment of our residents, and of course the entire Verde Valley community as well.”

The development’s plans also include parks, open space, green belts between each of the housing and commercial component within the development, and a shared garden area for the use and enjoyment of the residents.

Boulder Creek would be located within the town’s opportunity zone for tax deferred development and investment.