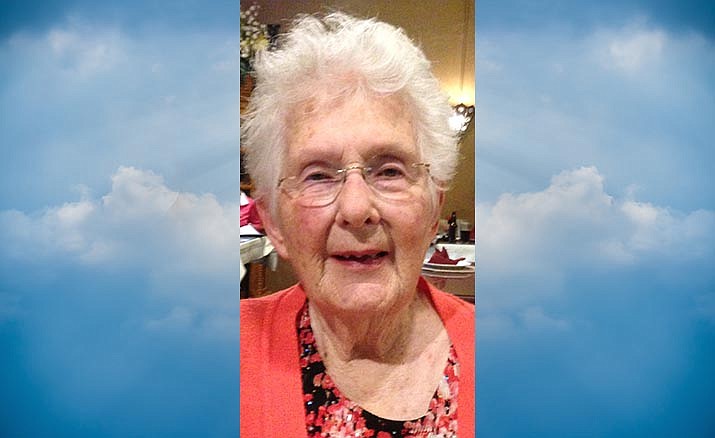 She was the daughter of Alvada (Thomas) Lang and Gaylord Lang. Virginia attended Collinwood High School in Cleveland, received her Bachelor of Arts degree from Hiram College in Ohio and later her teaching certificate from the University of Arizona in Tucson.

After college graduation Virginia lived and worked in Cuba for two years. When back in the U.S. in 1950, she met and married Theodore (Ted) Kuntz in Cleveland. The couple began married life in Rifle, Colorado. They had three children; David, Katherine, and Stephen.

Ted’s work required him to travel and the family relocated often to set up housekeeping in various other locations in Ohio, Montana, Arizona, Papua New Guinea, West Virginia and Australia, settling in Clarkdale in 2001.

Virginia did secretarial work before the children came along and was always very active in the churches wherever they lived.

She worked as an elementary school teacher in Tucson after their children were older. Throughout the many different full-time, part-time and volunteer positions Virginia held during her lifetime, her main focus was always being a devoted wife and mother, and gracious hostess to all.

Virginia is survived by her husband of 68 years Theodore Kuntz; their daughter, Katherine Knost of Clarkdale and Show Low; son, Stephen Kuntz (Leslie) of Cottonwood; six grandchildren and four great-grandchildren.

She was preceded in death by their granddaughter, Michelle Kuntz; son, David Kuntz; her sister, Marian Thurman; as well as her parents and other family members.

A Celebration of Life will be held at Verde Valley Christian Church in Cottonwood on Sat., June 1, 2019, at 11 a.m. Memorial contributions maybe made to Arizona Hospice Foundation, c/o Hospice Compassus, 70 Bell Rock Plaza, Suite A, Sedona, AZ 86351 indicating “in Memory of Virginia Kuntz.”