Arizona lawmakers vote to triple their per diem allowance 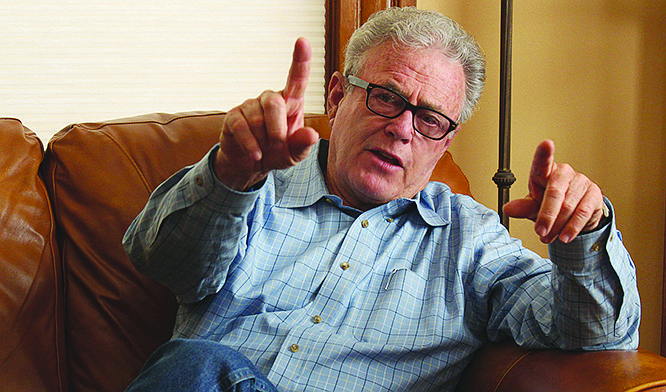 The approval by the full House and Senate came after Rep. Noel Campbell, R-Prescott, urged colleagues to make the vote on the politically risky move bipartisan and unanimous. Capitol Media Services file photo

PHOENIX -- Brushing aside the "optics'' of the last-minute action, state lawmakers voted Monday to triple the daily allowance they now get.

The approval by the full House and Senate came after Rep. Noel Campbell, R-Prescott, urged colleagues to make the vote on the politically risky move bipartisan and unanimous.

"It will give cover to anybody who has questions about it,'' he said. "If we do this in unison, 60 of us (in the House) vote, that is a message, a strong message to everybody out there, that you're not going to attack us and peel us off, one at a time and threaten us with retaliation because we voted to raise our per diem rate.''

But Campbell did not get his wish as legislators from both parties found reasons to oppose the move.

Out-county lawmakers now get $60 a day for the first 120 days the Legislature is in session, counting weekends, a rate not raised since 1984. Under the terms of HB 2760, they would be entitled to the amount the U.S. General Services Administration allows federal employees who have to travel into Maricopa County: $129 a day for lodging and $56 for meals.

Everyone who testified, both as lawmakers and the public, was sympathetic to the plight of out-county lawmakers who have to maintain a second residence.

But HB 2760 also seeks to raise the allowance for those who live in Maricopa County -- people who can go home every night and even have outside jobs -- from $35 a day to half the GSA rate, or $92.50. That was enough to convince several two in-county legislators to withhold their support.

"I live in Glendale so I don't drive that far,'' said Republican Rep. Anthony Kern. And he decried the timing -- the vote coming on the last days of the session -- as well as "the optics'' of lawmakers approving a sharp increase in their allowance.

Rep. Athena Salman, D-Tempe, questioned the flat rate, regardless of what actual out-of-pocket expenses lawmakers incur. She cited a 1947 Arizona Supreme Court ruling upheld the legality of per diem allowance but with language saying the law "provides for actual and necessary expenses for subsistence and lodging to the extent that these are supported by receipts and vouchers.''

And Rep. Aaron Lieberman, D-Phoenix, questioned the idea of lawmakers approving more money for themselves even when they refused just last week to restore all of the funds that have been cut during the recession in state aid to public schools.

The whole idea of the vote -- particularly on what is shaping up to be the last day of the legislative session -- drew raised eyebrows from teachers who have been at the Capitol monitoring the votes on spending bills.

"I can't get beyond the irony of your plight and how it is so incredibly parallel to what is going on with teachers,'' testified Christine Marsh. She was named the 2016 teacher of the year and was one of the prime proponents of higher pay.

Marsh pointed out that proponents of the allowance hike, like Rep. Charlene Fernandez, D-Yuma, have said the low salary -- $24,000 a year -- coupled with the lack of adequate reimbursement has resulted in few people telling her they are interested in running for the Legislature.

"And yet that, of course, is what teachers are facing,'' Marsh said.

She said lawmakers voting to hike their expenses should be ready for other parallels, like people telling them they knew what the job paid when they took it and they shouldn't complain about the pay.

Storm Gerlock had her own take on the move.

"I empathize and can find similarities with what is being said about the challenges of not being adequately compensated for the work that is being done,'' she told lawmakers. "As an education support professional who is paid hourly, I know the struggles of working two jobs and still not making a living wage.''

Rep. Bret Roberts, R-Maricopa, argued that that this is different, as the allowance for lawmakers comes out of the House and Senate budgets, not the state general fund which is where the dollars are allocated for teacher pay raises. That, however, drew a verbal slap from Fernandez who pointed out that all of the cash, whether for teacher salaries or legislative payments, comes from the same pocket of tax dollars.

Rep. Michelle Udall, R-Mesa, said that, under different circumstances, she might have opposed the hike in allowance. But she pointed out that lawmakers last year approved a 9 percent increase in the average pay for teachers, with another 5 percent in the budget for this coming school year and 5 percent more earmarked for the following year.

"Having done that in the past year and the past days, I think this is appropriate,'' Udall said.

Identical language was approved last week in the Senate Appropriations Committee, with both measures now awaiting full votes in their respective chambers.

Nothing in the measure affects the $24,000 salary, as that can be raised only with voter approval. That last occurred in 1998; subsequent ballot measures for a salary increase have been defeated.