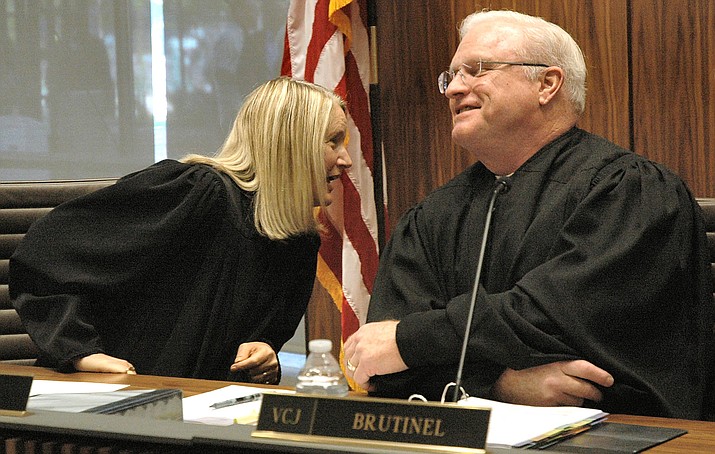 Justice Ann Scott Timmer, left, chats with colleague Robert Brutinel during a break in arguments in March regarding the question of marijuana extracts. (Capitol Media Services photo by Howard Fischer)

PHOENIX -- Arizonans who have medical marijuana cards are legally entitled to buy and use gummy bears, candies, extracts, tinctures and resins of the plant, the Arizona Supreme Court ruled Tuesday.

In a unanimous decision, the justices rejected arguments that the 2010 Arizona Medical Marijuana Act that legalized the drug for medical purposes allows patients to use only the leaves and flowers. Justice Robert Brutinel, writing for the court, pointed out that the voter-approved law defines "marijuana'' as "all parts of the plant.''

"The word 'all,' one of the most comprehensive words in the English language, means exactly that,'' he said.

Brutinel also listed some of the ailments for which a doctor may recommend marijuana, including cancer, glaucoma, Crohn's disease and relief from nausea and vomiting caused as side effects from other drugs.

"It is implausible that voters intended to allow patients with these conditions to use marijuana only if they could consume it in dried-leaf/flower form,'' Brutinel wrote.

"Such an interpretation would preclude the use of marijuana as an option for those for whom smoking or consuming those parts of the marijuana plants would be ineffective or impossible,'' he continued. "Consistent with voter intent, our interpretation enables patients to use medical marijuana to treat their debilitating medical conditions, in whatever form best suits them, so long as they do not possess more than the allowable amount.''

The justices also rejected arguments presented by Benjamin Kreutzberg, a deputy Yavapai County Attorney, that including extracts in the definition of what's allowable would blow a huge hole in the part of the 2010 law that limits marijuana purchases by qualified patients to just 2 1/2 ounces every two weeks. Brutinel said it's clear from the wording of the law that 2 1/2-ounce limit applies to the amount of dried flowers and leaves that went into the specific extract or product, not the weight of the final item.

And they sidestepped a broader challenge on the entire law as illegal because of federal laws that still make possession and sale of marijuana felony, saying that Kreutzberg never argued that until he brought the case to the Supreme Court.

Tuesday's ruling is most immediately a victory for Rodney Jones for possession of 0.05 of an ounce of hashish despite the fact he has a state-issued card allowing him to possess marijuana, and despite the fact he obtained the drug from a state-licensed dispensary. Prosecuted by the Yavapai County Attorney's Office, he was sentenced to and served 2 1/2 years in prison.

Attorney Robert Mandel said that, if nothing else, the decision means Jones can seek to have the conviction wiped from his record.

More broadly, Tuesday's ruling ensures that the nearly 200,000 Arizonans who have permission to use the drug will be able to continue to purchase it from a state-licensed dispensary in a form they prefer. A contrary ruling would have limited sales -- and use -- to only the leaves and flowers of the plant.

"The court has made it very clear now that the Medical Marijuana Act immunized patients to use marijuana in whatever form works best for them,'' Mandel said. "The decision is crystal clear in that respect.''

It also is a direct rebuff of efforts by Yavapai County Attorney Sheila Polk and other prosecutors who have continued to charge medical marijuana patients with felonies for the possession of products made from extracts of the plant.

Polk called Tuesday's ruling "troubling.'' And she took a shot at the logic used by the justices in concluding that products made from the plant have the same legal protections as the plant itself, calling it "akin to finding that explosive produced from fertilizer are protected by laws allowing the same of farm products.''

She said the proof is the fact that smoked varieties of marijuana have a content of THC, the psychoactive ingredient, averaging from 5 to 15 percent. By contrast, Polk said, hashish extracts can have THC potency levels of 70 to 90 percent.

"This the difference between Advil and morphine,'' she said, saying that's why the state Court of Appeals, which had upheld Jones' conviction, said that hashish is "susceptible to serious and extensive abuse.''

That difference, she said, is not lost on the dispensaries that sell it, citing websites advertising things like "mind-blowing shatter,'' and "mob moss'' wax.

"These are medicines?'' Polk asked.

In many ways the ruling was not a surprise.

During oral arguments in March, Kreutzberg told the justices that there is a legal difference between "marijuana,'' meaning the plant, and "cannabis,'' which covers things like hashish and other extracts. And he said the 2010 law legalized only marijuana for patients.

That drew a skeptical reaction from retired Justice John Pelander, sitting with the court because his replacement had not been named. He questioned how voters, in being asked to approve the law, would know the difference, pointing out even then that the statutes includes "all parts'' of the plant.

"It's undisputed in this case that the resin that we're talking about here is part of the plant,'' he told Kreutzberg. "So tell me again why the people of Arizona would have known that the mesin extracted from a marijuana plant would not be covered by AMMA?''

Justice Scott Bales said allowing patients to use only leaves and flowers would be "irrational because it would force people to use the lease effective way of obtaining the therapeutic effects that are thought to be associated with cannabinoids.''

"It would mean you would have to eat a lot of well-baked browning,'' he said.