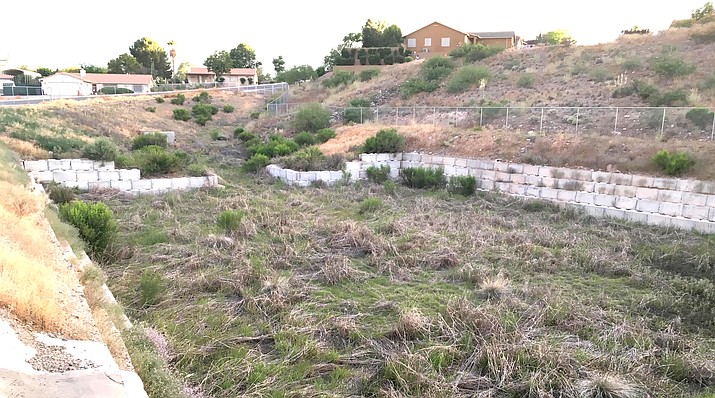 Camp Verde’s Public Works department has plans in the next week or so to clean up the water catchment basin on Cliffs Parkway, Public Works Director Ron Long said. VVN/Bill Helm

CAMP VERDE – Camp Verde’s Public Works department has plans “in the next week or so” to “clean up” the water catchment basin on Cliffs Parkway, Public Works Director Ron Long said.

But there isn’t a “distinct budgeted project to landscape that basin” between the Cliffs and the Views housing developments, Long said.

“It was just something that I thought would improve the street appeal,” Long said. “The best thing to do right now is to mow and weed eat the basin. It will improve the look immediately. We have a work order out to get that done.”

Depending on the scope of work involved, Long said that landscaping could cost “around $1,000.”

“But the real cost would be installing an irrigation system for plants that would be in the $6-8,000 range,” he also said.

Long has had conversations with Camp Verde volunteer Cris McPhail, who is currently planting trees and vegetation at Rezzonico Park.

“She may be able to help us out in the future with planting some native trees and vegetation around the perimeter of the basin if we can find the money to purchase some plants,” Long said.

According to Long, the town’s stormwater budget “is very limited for the amount of drainage issues [and] problems that we have here.”

“We did have some funding,” Long said. “But it was needed for higher priority problems, most of which have a much higher priority than landscaping because they pose a real threat to property, public health, and public safety.”

Verde Lakes has “a lot of drainage problems that we regularly have to divert funding and manpower to,” Long said.

“However, we have numerous stormwater issues within Camp Verde’s 43 square miles of incorporated area that we have to improve and maintain,” Long said.

Long also said that there are “new and reoccurring stormwater issues all over town that need attention every year because we’re located in a river valley surrounded by mountains from which the stormwater runoff passes right through our town on its way to the river.”

“We typically receive approximately $130,000 from our general fund, but that is an operational budget which only has $20,000 for stormwater maintenance, and we get $75,000 [each] year from the [flood control district] to improve and maintain our drainages,” Long said. “This is only a fraction of funding we need to improve our drainage problems.”

Each year, Camp Verde asks for “over $1 million worth of CIP funding for the drainage [and] stormwater problems,” Long said. “Our funding levels have not been increased.”