Life in the Slow Lane: All Grown Up

No, not the puppies, although they are growing by great big leaps and bounds. Only two weeks ago they were cute cuddly not-very-heavy things. Now I swear they weigh twice what they did when they came and are all legs. I'm amazed at how well they're doing, as far as training goes. They've already mastered "sit." It's become their go-to reaction to any scolding, as if they think sitting is the ultimate apology. They've learned to stay close to me when we walk the pastures and they come about 50% of the time they're called. They also both know that the very loud "No!" means they must immediately stop chasing the sheep. 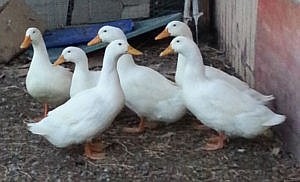 I don't understand why the sheep allow themselves to be chased by these little girls. Tiny especially doesn't tolerate it from any other dog. She'll charge and stamp her feet, which pretty much resolves the situation. I suspect it has something to do with how unpredictable puppies, or any baby four-footer, can be. I'm almost certain that this fearful ovine reaction will cease the moment the lambs are born. And, by the way, I'm beginning to worry that Tiny is carrying four, not three babies. She's once again HUGE!

As for Moosie and Bear, Moosie is still in a snit over the puppies. Although he refuses to allow them to lick his mouth, he has agreed to show them how to dig for gophers. Meanwhile Bear thinks these girls are the best gift I've every given him. He and Radha have bonded and Bear now comes along every time I walk the girls. As for Radha, she might weigh less than twenty pounds but she's fearless. When they play, she goes straight for Bear's throat, growling as if she's taking on, well, a bear. Bear obligingly rolls onto his back, his feet in the air, while she, still snarling, chews on his jowls, his ear, his lips and his throat. Meanwhile, Kali, who is more cautious about playing with such a big dog, chooses to chew on Bear's tail. When he turns to wrassle with her, she leaps up and runs circles around him. What fun all four of them could have together if only I could convince Moosie to stop sulking.

The "All Grown Up" is about the ducks. Just as my friend Lu promised when I bought the ducklings from her, only eight weeks have passed and the ducks now look like ducks. My chickens, who are now 3 months old, look stunted next to these hulking white Pekins.

The Pekins turned out to be interesting to raise. First, I'm surprised at how bonded they are to each other. Not even my turkeys are like this. If one of these shiny white guys moves, all the others move with him as if they're somehow strung together. A few weeks into their life here, I traded out their little water basin for one of the pig troughs. They loved it. They got in and out so often that I had to change the water twice a day due to mud build up. Even though they acknowledged me as the official feeder and water renewer, no matter how many times I entered their run, they acted like I was the local ax murderer.

Hmm. I guess I am the local ax murderer when it comes to birds. At any rate, they have never become accustomed to me and ever time I come in, they flee to the far end of the run, which is where they are in that picture.

Then one day I had one of those moments when all becomes clear. I went to the pond and raked up a bucket of pond grass--water weed--and added that in their tub. As usual, the ducks waited until I had closed the gate before going to inspect this strange new offering. One of them cautiously dipped in its beak and pulled out a strand of grass. He, or she, slurped it down like spaghetti and immediately went crazy. That set the others off and they were crawling over each other in the tub, chowing down on grass as if there was no tomorrow. Now, even though they still move to the back of the run as I enter, they start quacking the moment they see me coming with the grass bucket. The quacking gets louder as the grass goes in, then louder again as I back out of the run. The moment I shut the gate, it's every duck for itself. They still crawl all over each other, fighting to get the biggest beak full.

I'm looking forward to moving them out of the brooder coop. I'm no longer certain that these ducks are going to work for snail and slug patrol. I think they're too skittish and shy to tolerate a movable coop. Instead, they'll probably end up living in the little yellow coop next to the pond, where the hens will lay wonderful duck eggs that I'll turn into omelets. There's only one problem. The puppies have turned that coop into a playground, dashing in through the lower door then clambering out of the upper door, after which they slide into the pond to chase frogs. Somehow, I'm certain if the puppies chase the sheep, they'll also chase ducks, especially if there's swimming involved. Time to put up more fencing.