Can You Help? Sheriff’s Office looks for items stolen from Cornville home 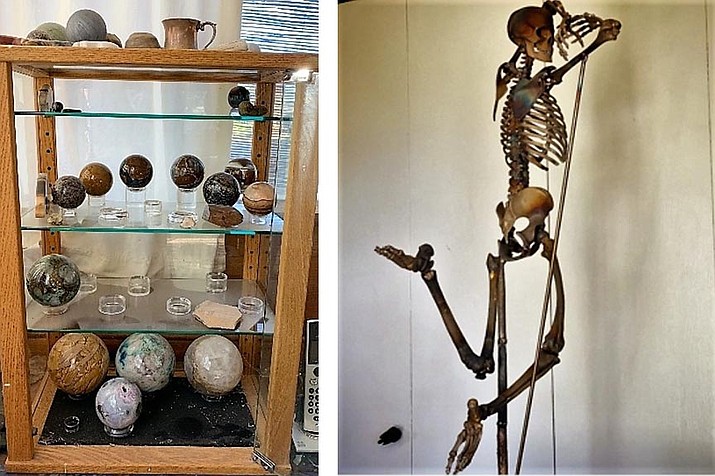 Eight spheres stolen, some pictured above left and constructed of various materials. Those identified include a three-inch meteorite sphere valued at $2500 value, a three-inch Basalt sphere with see thru tubes valued at $90, and a six-inch petrified wood sphere valued at $600. Photo at right, Skeleton bronze stolen, anatomically correct in a dance position, arms raised above head, legs leaping, about three foot tall and 30 pounds. Valued at more than $6000. Photos courtesy Yavapai County Sheriff’s Office

CORNVILLE – On May 8, 2019, Yavapai County Sheriff’s deputies completed a burglary report that involved stolen artwork and other property from a Cornville home on Waddell Road.

A Skeleton bronze sculpture about three foot tall and 30 pounds was also reported to have been stolen. The sculpture, according to the press release, was “anatomically correct in a dance position, arms raised above head, legs leaping,” and valued at “more than $6,000.”

According to the press release, detectives “are working leads while seeking help from the public in locating the tools and artwork.”

If anyone has information regarding this case and/or the whereabouts of the stolen property, contact YCSO Detective Todd Swaim at 928-554-8605 or Yavapai Silent Witness at 1800-932-3232.

If a tip to Yavapai County Silent Witness leads to an arrest, the caller would become eligible for a cash reward, the release also stated.