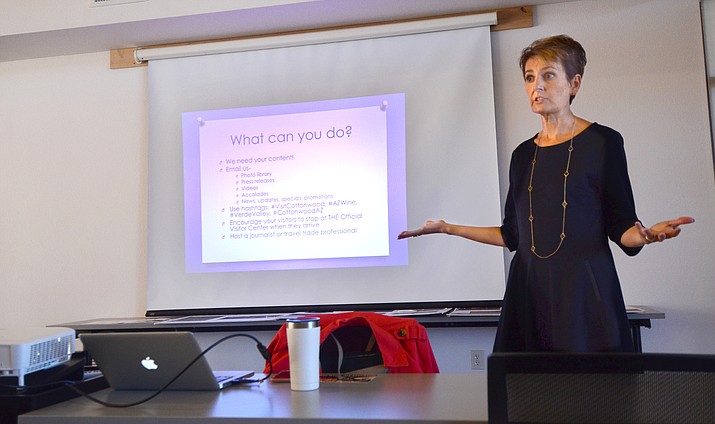 Heather Herman who the chamber hired as its new marketing consultant in February, talked about ways that the chamber can promote the area and increase visitors during a Cottonwood Chamber of Commerce “Tourist Round Up!” meeting Tuesday. VVN/Vyto Starinskas

Cottonwood Chamber of Commerce officials explained how they will try to attract more tourists to Cottonwood during a “Tourist Round Up!” discussion last week.

The chamber said it needs help from the public to join in its tourism marketing effort by posting and sending them photos of the Verde Valley so they can use them to promote the region.

Heather Herman, who the chamber hired as its new marketing consultant in February, explained ways that the chamber can promote Cottonwood and increase visitors.

Herman said she used to work for the Sedona Chamber of Commerce and Tourism Bureau and now runs her own marketing and public relations firm.

Herman said increasing overnight visitations to Cottonwood was one goal that the chamber is working on. She said the chamber wanted to make Cottonwood more than a day-trip destination.

The Chamber is going to increase its promotion of the new Visitor’s Center on Cove Parkway, Herman continued, and also increase its public relations effort and outreach to the community. The Tourism Round Up meetings are part of the outreach, Oliva del Rio said.

Herman stressed that it was important to get the public and chamber members to post photos and videos to the chamber’s website, Facebook site or email them to provide free content for the chamber to use.

She said the chamber does not have the funds to hire photographers and needs to rely on the organic content for great photos of the Verde Valley. She said all the photos people post can be pulled together under certain hashtags such as #VerdeValley or #CottonwoodAZ .

“We need your help if you got great video and content,” she said.

Oliva del Rio said Tuesday’s meeting was part of the city’s new relationship with the city of Cottonwood.

Oliva del Rio said in the new contract with the city, City Manager Ron Corbin is being much more detail-orientated on what the city expects for their bed tax money.

“The majority of that stuff we have already been doing,” Oliva del Rio said. “But it’s nice having a partner that is actually engaged and asking questions. “

Oliva del Rio said the chamber has been getting bed tax from the city since the early 1990s or late 1980s. So this year the contract with the city is a little different, because it’s set on a dollar amount. Before it was based on a percentage. The chamber gets $19,000 a month flat rate until June of 2020, he said.

A new agreement hammered out between the Cottonwood Chamber of Commerce and the City of Cottonwood in August will fund the Chamber, through the city’s bed tax revenues, at $230,000 per year for as many as three years.

The director said the chamber opted to hire a marketing consultant instead of a full-time marketing staff person, which they had in the past.

“I’ve actually known Heather for about 12 years,” Oliva del Rio said. “And she does a lot of real good work and she has some excellent connections.” Her connection with the office of Tourism is huge, she knows the area and she used to work for the Sedona chamber.

Oliva del Rio said all three of them are involved in the tourism marketing and planning.