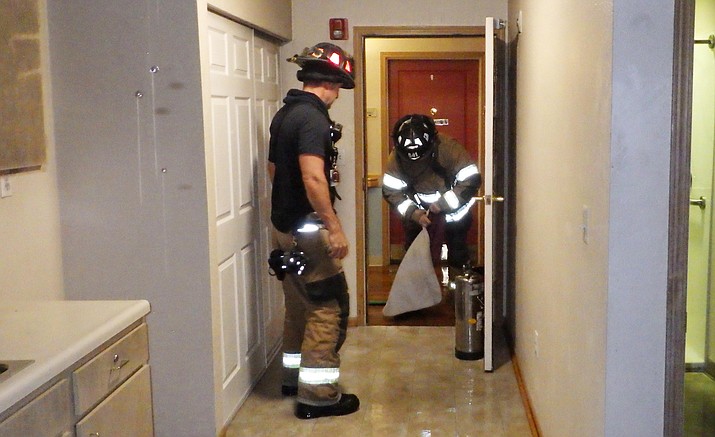 Sedona firefighters assist with clean-up after the incident had been controlled. Photo courtesy of Sedona Fire District

Sedona firefighters were dispatched to the Sedona Winds assisted living facility at 475 Jacks Canyon Road for a fire in one of the residential units on Saturday at 1:56 a.m., according to the Sedona Fire District.

“The automatic fire sprinkler system had extinguished most of the fire before we arrived,” said Captain David Rodriguez, “limiting fire damage to the one room.”

The fire was discovered by a nurse’s aide when the sprinkler system activated and triggered the buildings fire alarm system.

The aide was able to evacuate the resident from the room and unplugged the HVAC unit, which appeared to be the cause of the fire, stated the SFD press release.

“This was an amazing success story,” said Fire Marshal Jon Davis in the press release. “A working fire sprinkler system, combined with a well-trained staff and a quick response by firefighters resulted in the best possible outcome.”

“I have no doubt that without all of those elements coming together, the outcome would have resulted in injury or death to occupants of the building and damage to the structure would have been extensive.” said Davis, “Incidents like this really highlight how a comprehensive fire safety strategy can benefit a community.”

Yavapai County Sheriff’s Office Deputies along with YCSO Search & Rescue members and Sedona Police Department assisted at the scene with the temporary evacuation of residents from the wing of the building where the fire occurred. Approximately 20 residents were displaced for a couple of hours and the resident of the room where the fire occurred, had to be relocated to another room while theirs is repaired.

There were no injuries reported and damage is estimated at $20,000, the SFD press release said.