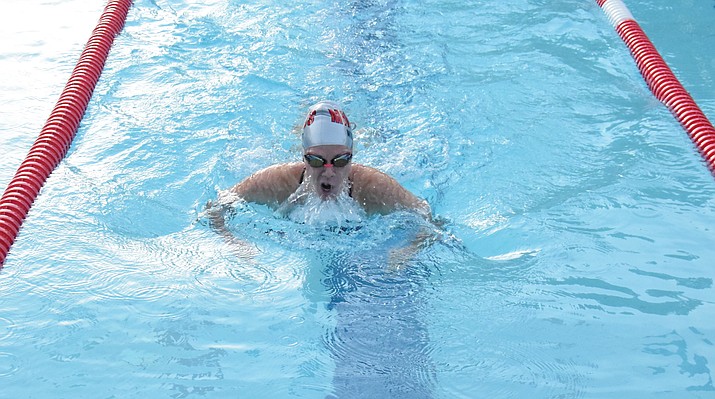 Mingus senior Emma Warner earned the No. 1 seed in the 100 breast stroke and the seventh seed in the 200 individual medley for State. VVN/James Kelley

Mingus Union swimming is sending 19 athletes competing to the state championship meet, again led by their relay teams and eyeing a record.

The Marauders are competing at the Division III state meet this week in Paradise Valley at the Dady Aquatic Center at Phoenix Country Day School. The finals are scheduled for Friday at 3:30 p.m.

“When you’re in the sport of swim, when you are a swimmer or you coach, or you’re a parent that understands swim, you understand what a big accomplishment it is to make it to state, you understand what a big accomplishment these times these kids are putting up on the board, especially when I only have one swimmer out of this whole bunch that swims year round,” Mingus head coach Gretchen Wesbrock said. “The rest of them they train typically with the Clippers in the summer and then with Mingus, so to be a half year swimmer and to be doing what they’re doing is really tremendous. It’s not a high glory sport like Friday night football or some of those other sports, so for them to have put in all the dedication and time, it’s exciting for them to get go and represent at a meet where everybody there understands that accomplishment.”

Senior Emma Warner leads the way for the Marauders. She goes into the meet seeded first in the 100 breast stroke and seventh in the 200 individual medley.

Wesbrock said that No. 1 ranking is “super exciting.” 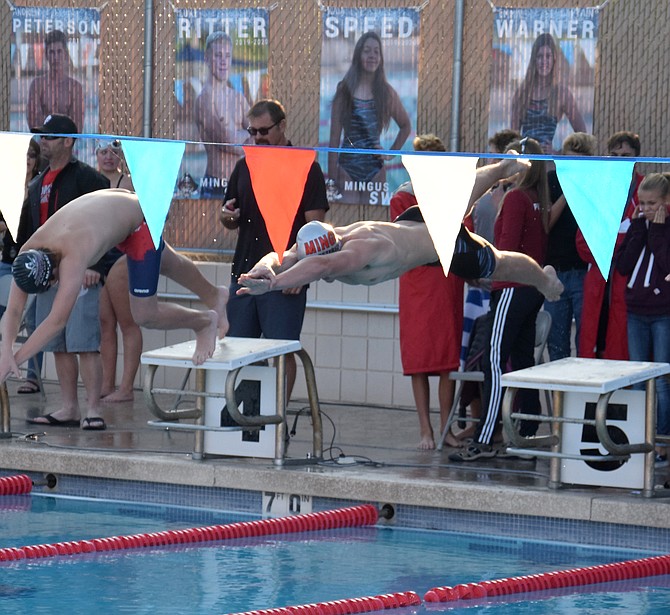 Mingus senior Andrew Peterson is seeded ninth in the 50 free and 100 back for the state meet this week. VVN/James Kelley

“Oh I love it The past few years it’s kinda been the boys who have been in maybe the higher seeded going in, this is definitely the year of the girls,” Wesbrock said about their relay teams. “We’ve got a girls team that’s going after a record in the 200 freestyle relay and they’re very close. They’re a 1:46 low and they’re trying to a get a 1:45.20 and they absolutely could make that happen and that record’s back from 2008, so an 11 year old record’s kind of a cool one to beat, so excited about that.”

During the regular season the Marauders racked up automatic and provisional qualifying times. They prepared 19 swimmers in the week between the last meet and state.

“We moved forward 19 kiddos in anticipation of where things were going to land with State, they landed pretty close to where we thought we were going to be,” Wesbrock said.

Most are competing and some are alternate.

The top 16 relay teams and top 24 individuals make it to preliminaries for state, with the top eight relays and top 16 individuals moving on to day two.

“We had quite a few provisional times that didn’t make the cut,” Wesbrock said. “Every year you just don’t know what that’s going to look like in any individual event, you could swim a faster time than you did last year and have made State and then this year you just have a group that beats ya out. It’s been such a great team in regards to how they take care of each other and that real family like atmosphere.”

Wesbrock said the Marauders are physically quite ready for State.

“We’ve been in an active taper for the last week and a half so they definitely have a lot of energy,” Wesbrock said. “So just trying to figure out how to harness that and not have them go out and do other stuff because they’re feeling so great and want to go ride their mountain bike or go hike or go do whatever, so that’s probably been the hardest thing about the last two weeks, but the atmosphere’s been awesome, they’ve been full focused, hard working and they’re really exciting to go and represent our school.”