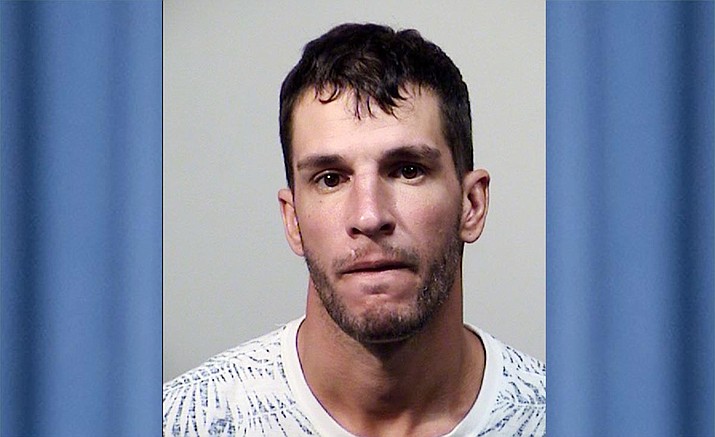 Cottonwood Police arrested a man this week who is alleged to have robbed a woman at knifepoint in the parking lot of the city's Walmart late at night.

Christopher Michael Kelley, 36, of Cottonwood, who is also known as “Baltimore," was arrested Thursday and charged with armed robbery, aggravated assault with a deadly weapon and being a prohibited possessor, which are felonies, along with misdemeanor criminal damage, Cottonwood Police said in a news release.

Police allege that in the early morning hours of Nov. 1, Cottonwood officers responded to the Walmart parking lot for a reported robbery that had just occurred.

The victim, a woman, said she had just been robbed. She told police four people surrounded her vehicle, and she recognized “Baltimore” out of the group.

Kelley allegedly approached her with a knife in one hand and a rock in the other and told her to give him the money she owed him.

The victim told police she then rolled down her window enough to give him money, but after he took it, Kelley then allegedly threw the rock through the driver's window, striking her in the face.

The release states she was transported to the Verde Valley Medical Center for treatment and later released.

Thursday, Nov. 7, Cottonwood Police received a tip that Kelley was hiding inside of a vehicle in the Walmart parking lot. He was located and taken into custody without incident.

Man gets six years in prison for violent attack at Walmart
Out-of-state visitor has wallet, rental car taken at knifepoint in Old Town
Third man arrested for alleged robbery, assault in Verde Village
Woman charged with attacking boyfriend with knife
He did it; she did it: Two suspects charged in Taco Bell robbery plead not guilty
Event Calendar