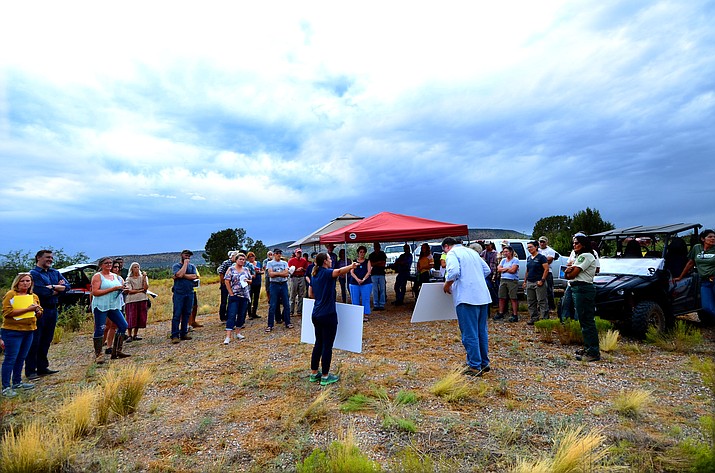 A group gathered this summer in response to a proposed "glamping" business in the Cottonwood area. Under Canvas, the glamour camping company that proposed a 100-tent luxury camping site on 82 acres at the end of Bill Gray Road, has withdrawn its application. VVN file photo/Vyto Starinskas

COTTONWOOD — Under Canvas, the glamour camping company that proposed a 100-tent luxury camping site on 82 acres at the end of Bill Gray Road, has withdrawn its application with Yavapai County, Leah Brock, planner for Yavapai County Development Services, said Friday.

A hearing on the glamping issue was scheduled to take place as part of the Nov. 21 Yavapai County Planning and Zoning Commission meeting. No future public hearing is scheduled, explained Brock.

“The use permit application for the proposed Under Canvas “Glamping” campground facility … has been withdrawn by the applicant,” her email stated.

Even though she gave no more explanation, Yavapai County Supervisor Randy Garrison said on Saturday that he was not surprised about the withdrawal, considering the backlash the proposal received from residents who live near the proposed project.

He said he didn’t have any specific information for why they pulled the application, but did not think the proposal is “gone,” and Under Canvas might simply be reconsidering it.

Under Canvas already reduced the original plan for the project based on the feedback from an Aug. 6 community meeting, during which the company unveiled its development plans to nearby residents, according to release attributed to Caitlan Cullen, manager of real estate for Under Canvas.

More than 30 residents raised concerns about the untraveled dirt road and the pristine lifestyle during the neighborhood. The area has a view of Sedona-area red rocks and Sycamore Canyon Wilderness.

The site plan included two acres of development with the priority-designed tents, a central restaurant for campers and a social tent for campers, a main campfire area, water and sewer and gravel roads.