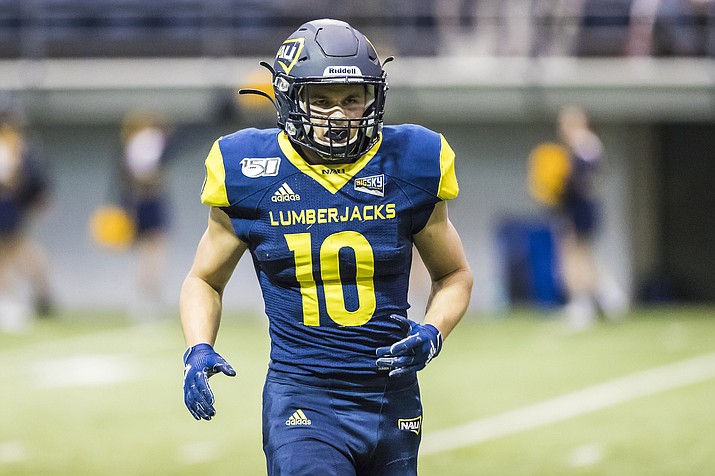 Northern Arizona University’s Director of Cross Country and Track & Field Michael Smith has been named as the Big Sky Men’s and Women’s Cross Country Coach of the Year for the 2019 season.

This is Smith’s 12th time receiving a Coach of the Year award from the Big Sky Conference. It is also the 26th time a coach from NAU has won the men’s cross country version of the award and the 20th time on the women’s side. It is the third straight men’s honor for Smith.

Smith also coached true freshman Drew Bosley to a first-place finish in the men’s race, which would earn the Wisconsin native the conference’s Male Athlete of the Year and Male Freshman of the Year awards. Bosley led a Lumberjack group that claimed the top three spots with Geordie Beamish and Brodey Hasty finishing with times of 26:55.7 and 26:56.2. Ryan Raff added a sixth-place finish with a time of 27:06.2, while Jack Shea rounded out NAU’s top five with a 12th place showing in a time of 27:26.6. It was the fourth straight title for the defending national champions. The Lumberjack men won every race they competed in this season, as they picked up the conference win.

Northern Arizona’s coaching staff is considered one of the top in the long distance running world and the program’s performance at conference this season was a huge indicator of why they garner so much respect in the running community.

“I believe that Mike is the best coach in the NCAA,” said assistant coach Jarred Cornfield. “The way he operates, the attention to detail and the care for all the people around him is unmatched. He is so genuine; it is always easy to be happy for him when he receives these awards because he truly deserves them.”

“Coach Smith is very deserving of this accolade,” added assistant coach Rebecca DeLoache. “Both of our conference championship wins are a testament to Coach Smith’s continuous outpouring of himself into each of our student-athletes. Sure he writes great workouts, but more importantly, he has a way of making our runners truly believe in themselves which results in a great team race and ultimatley a championship.”

The men’s and women’s cross country teams are currently preparing for the NCAA Division I Mountain Regionals in Salt Lake City, Utah on Nov. 15th. The NAU men’s team will be running against top-tier programs like BYU, Colorado, Air Force and Colorado State; the ‘Jacks have won five of the last seven Mountain Regional meets. On the women’s end they will see defending champions New Mexico, Colorado, BYU and Big Sky Rival Southern Utah.

The Jerry Rice Award, named after the legendary Hall of Fame wide receiver, has been presented in the postseason to the FCS freshman player of the year since 2011.

Johnson (as of press time) leads all FCS freshman with 700 receiving yards on 44 catches, including five touchdowns. He has amassed a pair of games with more than 100 yards and has notched at least 94 yards in four of nine contests.

The Anthem, Ariz., native has shown big play ability having recorded 13 catches of 20 yards or more this season, including four touchdowns. Johnson has snagged at least one reception of 44 yards or longer in six of nine games.

Johnson is trying to become the second Lumberjack to earn the Jerry Rice Award, as the top freshman in all of the FCS and the first since current NAU quarterback Case Cookus was honored following a 2015 season which saw him total 3,117 yards and 37 passing touchdowns.

Still a young award, the Rice is distinguished, with three of the first four recipients to complete their college careers playing in the NFL: former Towson running back Terrance West, Eastern Washington wide receiver Cooper Kupp and Fordham running back Chase Edmonds.

A national panel of over 150 sports information and media relations directors, broadcasters, writers and other dignitaries will vote on the award following the regular season.

The senior signal caller became NAU’s all-time leader in passing touchdown with his current total of 100.

Cookus is only the second player in Big Sky history to hit the century mark in scoring tosses, joining Eastern Washington’s Vernon Adams (110 from 2012-14).

The Thousand Oaks, Calif., native was also listed on the preseason watch list for the award, which included 40 players.

The 2019 CFPA FCS National Performer of the Year Trophy is a 22-inch K-9 optic crystal tower with eight-inch crystal football on top. All FCS players are eligible for the award. The award winner will be announced January 15, 2020.