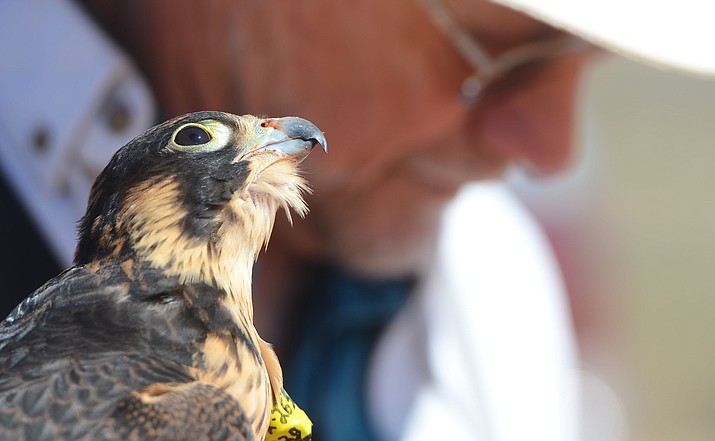 Randy Hale training his young peregrine falcon to fly, get into shape and hunt near Cottonwood recently. VVN/Vyto Starinskas 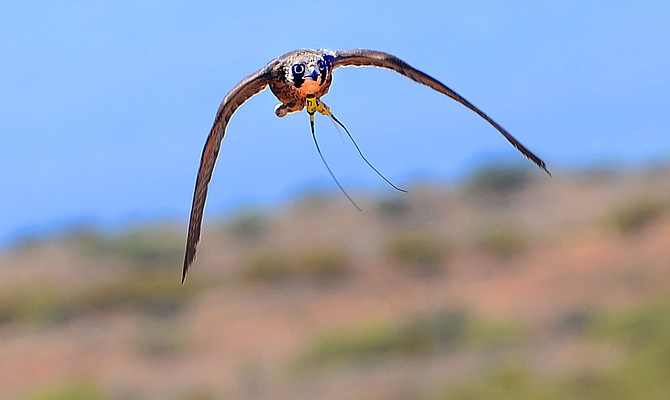 Verde Valley falconer Randy Hale expects this young peregrine to be released into the wild in late December or early January. VVN/Vyto Starinskas

COTTONWOOD — The peregrine falcon stretched opened its wings in the warm thermal and hovered over a brightly colored kite fluttering in the wind over Bill Gray Road near Cottonwood.

His lunch was attached to the kite string about 30 yards in the air — a frozen piece of quail meat.

The falcon flew two huge circles and then glided down closer to the ground to look at the falconer and his friend squarely in the eyes before rising up directly toward the piece of meat.

The peregrine didn’t know he was actually exercising and getting a work-out by local falconer Randy Hale.

Hale said he is conditioning, training and teaching the young bird how to hunt so it can be re-released into the wild. The bird was found on the ground last June at the bottom of a nesting site in West Sedona.

The helpless falcon was brought in to Billy Harvey at Runnin’ W Wildlife Center in Cornville, who passed it on to Hale to train for release since he was a falconer.

“Right now I’m getting him conditioned,” Hale said. “You have to mirror what happens in the wild.”

Mirroring what happens in the wild will be a huge task, since peregrine falcons are known as one of the fastest flying birds on the planet. They reach 200 mph when they “dive-bomb.”

They learn the ability to “pursue and chase stuff,” Hale said.

The bird will have a transmitter and the range is for many miles, Hale said. He calls in the bird with a lure with food on it.

Hale said he’s had to look for this peregrine falcon a number of times during training.

“I want him to get up and fly and stay there a long time,” Hale said, “to build conditioning.”

Peregrine falcons, said Hale, are nesting all over the Verde Valley. “They are doing extremely well.”

In the 1960 and the 70s, peregrine falcons were threatened because of the use of the pesticide DDT.

“The falconers were hugely instrumental in the recovery the peregrine” because they blew the whistle and announced that there was problem with the peregrine population, Hale said.

“We’re the interest group that watched them and worked with them,” he continued. Falconers saw that nest sites were not active, so after the U.S. Fish and Wildlife Service looked into that, realized there was a problem, and in 1970, the peregrine falcon was placed on an endangered species list.

Falconers began breeding projects to reintroduce the peregrine falcons into the wild and the Peregrine Fund and other groups began reintroducing the bird.  DDT was taken off the market. The reintroduction was successful, and in 1999, the Wildlife Service took the Peregrines off the endangered species list.

However, the peregrine will continue to be protected by the Migratory Bird Treaty Act.

Hale’s bird is probably a down-line-offspring of peregrines that were reintroduced during the 1980s, he said.

He says people can fly numerous different kinds of falcons, such as peregrines, prairie falcons, gyrfalcons and kestrels.

And by “fly,” Hale means take off and come back to the falconer.  He joked that it defeats the purpose if they don’t come back, “You spend a lot of time training a bird.”

The whole premise of falconry is getting to go out in the wild and watch birds do what they do naturally, but “up-close-and-personal.”

“It’s predicated on trust,” he said. “The bird has to trust you or there’s no reason for it to stick around.”

When the birds fly, they fly untethered, and if “they didn’t like you, they would just fly away.”

They learn that you are a good source of food: “It’s much like training a dog to come to you for a biscuit.”

Hale only puts a hood on the bird when transporting him in his car to keep him calm and from thrashing around.

Hale said he has been flying birds for more than 50 years. He got interested in falconry with his brother when he was 12 years old and a neighbor was a falconer.

He started reading up on it and studying the sport, but this was before the federal regulations governing falconry were passed.

Hale said he didn’t think there were many licensed falconers in the Verde Valley and only several hundred in Arizona, which is organized under the Arizona Falconers Association.

Licenses are now required for falconers.

“It’s difficult to get into,” he said, adding that he is licensed through Arizona Game and Fish Department.

A person needs a sponsor who has been a licensed falconer for at least two years. A falconer’s facilities and equipment have to be inspected and meet certain requirements. There is a written test that shows a person understands the sport, he added.

A person that has completed all those requirements, gets a license, will be able to then get a bird from a licensed dealer, but it’s all regulated, Hale said.  It’s always a young bird, and the falconer works with it and trains it.

Randy and his wife, Susan Hale, are the owners of the Manzanita Restaurant in Cornville where Randy is also the chef. The long-time restaurant has been written up in Arizona Highways Magazine and other publications.

If you find an injured bird, call 928-821-0098 or through runninw.org or call Arizona Game and Fish, who is a partner with the Runnin’ W Wildlife.