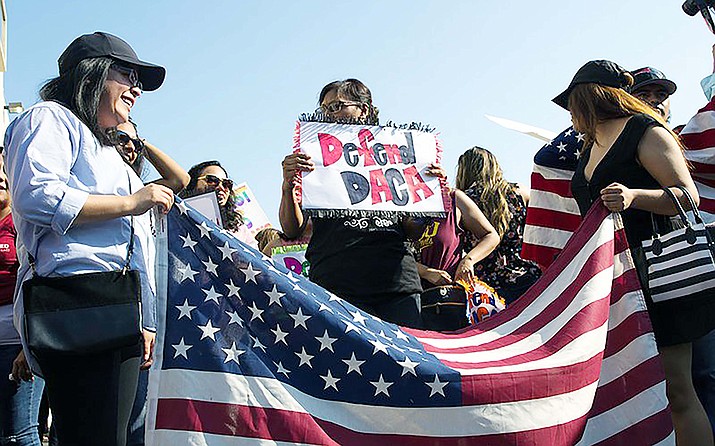 Protesters in this 2017 file photo to march toward the Immigration and Customs Enforcement field office in Phoenix after then-Attorney General Jeff Sessions called for an end to DACA. Courts blocked that move but the U.S. Supreme Court is set to hear arguments in the case Nov. 12. (Photo by Andrea Jaramillo/Cronkite News)

CHANDLER -- Gov. Doug Ducey said Tuesday the ultimate solution for how to deal with "dreamers'' has to come from Congress.

"The Supreme Court's going to do what the Supreme Court's going to do,'' the governor said hours after the nation's high court heard legal arguments about whether President Trump has the authority to cancel the Deferred Action for Childhood Arrivals program. DACA, established by President Obama, allows those who arrived in this country illegally as children to remain and work if they meet certain conditions.

Trump, in essence, contends because the program was created by executive action it can be similarly abolished. The question for the Supreme Court is: Does he need a rationale for that move, and its that rationale justified?

Ducey said that, whatever the justices rule, he wants there to be a path toward legalizing the status of the more than 660,000 DACA recipients already in the country, including nearly 25,000 in Arizona.

"I want to make sure the rug isn't pulled out from underneath these DACA kids,'' he said.

And that, the governor said, will require a compromise.

"I think it's an opportunity for border security and immigration reform,'' Ducey said.

"Let's start with border security,'' he continued. "And let's make sure that this issue around DACA is taken care of.''

Ducey brushed aside questions of whether congressional Democrats would be willing to enact enhanced border security ahead of immigration reform and trust Republicans to follow through.

"That's a political question,'' he said.

"What I'm giving to you is a very solvable equation,'' the governor said. "Congress should do its job.''

The governor's position echoes comments made the day before by U.S. Sen. Martha McSally who said she had proposed a solution to the problem.

"I've been working on this for a very long time,'' she said Monday. "And I do believe there is a way, a bipartisan way, we can work together to secure the border and find a legal path forward for DACA.''

McSally also said she has an answer.

"My legislation did that in the House,'' she said.

As a representative, McSally had been a co-sponsor of the Recognizing America's Children Act. It would have provided pathways for legal status for DACA recipients.

But what McSally did not say Monday is that she asked the House for unanimous consent to formally take her name off that bill.

That occurred in the spring of 2018 when she was hoping to becoming the Republican nominee for the Senate seat being vacated by Jeff Flake. She was facing two GOP foes who had taken harder-line positions on immigration: former state Sen. Kelli Ward of Lake Havasu City and former Maricopa County Sheriff Joe Arpaio.

McSally shifted her support to the Securing America's Future Act which would toughen border security. And as to DACA recipients, they would have been granted only "contingent nonimmigrant status.''

Aides to McSally said at the time that she "wanted to clarify which legislative solution she backs wholeheartedly.''

And weeks later, with the Republican primary still pending, her staff removed from YouTube a video of McSally defending the DACA program.

McSally won the GOP nomination only to be defeated in November by Democrat Kyrsten Sinema.

Despite that loss, Ducey tapped her to fill the vacancy created by the death of Sen. John McCain. That means McSally has to run again next year if she wants to fill out the last two years of that term.

State Attorney General Mark Brnovich has sided with Trump in the legal battle playing out at the Supreme Court, signing on to a multi-state legal brief contending that Obama never had the legal authority to create the program in 2012.

In explaining his position when the brief was filed in 2017, Brnovich said it isn't necessary for the justices to agree with his arguments about Obama exceeded his authority. He said the high court can give Trump the go-ahead to abolish the program on other grounds.

Brnovich also said that a Supreme Court decision backing the president would be a good thing, forcing Congress to finally do something.

"DACA recipients are being used as political footballs by both parties,'' he said. "There's no incentive for politicians in Washington, D.C. to solve this problem because they'd rather have it around as a political issue.''

Ducey's position on seeking a congressional solution is not new.

"I have doubted the legality of President Obama's unilateral actions,'' the governor said in 2017 when Trump first proposed scrapping the program. Ducey said he has taken the position that "Congress needs to address our outdated immigration policies and put a more strategic focus on border enforcement.''

But even then, the governor made it clear he wanted some permanent solution for dreamers, saying many are "living in limbo.''

"They should be held harmless from the decisions of their parents,'' he said.