More than 250 show for Cornville feedback on developments 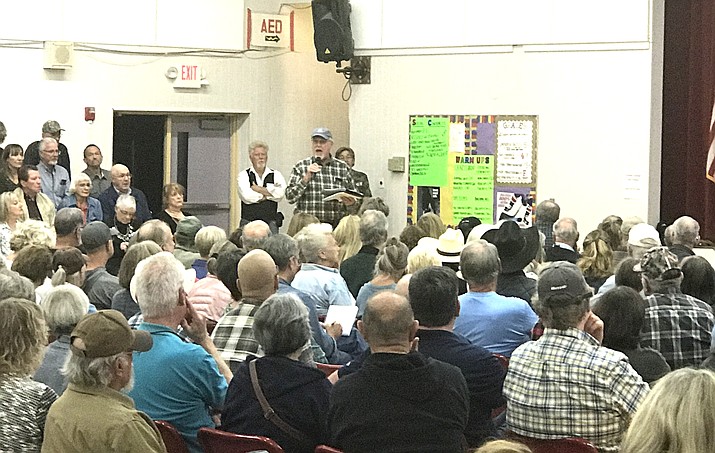 Jim Collins speaks to the crowd at Tuesday night’s meeting. A crowd of more than 250 people, many of whom were local residents, gathered at Oak Creek Elementary School on Tuesday to give the Cornville Community Association Planning & Zoning Committee feedback on two large planned area development proposals in the area. VVN/Jason W. Brooks

CORNVILLE — Two students per household in 2,500 housing units equals 5,000 students. That’s the sort of math some of those who spoke were spelling out to the Cornville Community Association Planning and Zoning Committee at Tuesday’s meeting. 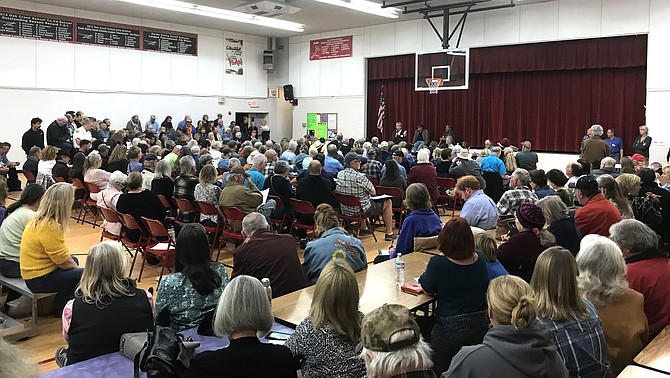 A crowd of more than 250 people, many of whom were local residents, gathered at Oak Creek Elementary School on Tuesday to give the Cornville Community Association Planning & Zoning Committee feedback on two large planned area development proposals in the area. VVN/Jason W. Brooks

More than 250 people, many of whom were local residents, showed up to Oak Creek Elementary School Tuesday evening to give the committee feedback on two large planned area development proposals in the area. Spring Creek Ranch and Villa Bellagio are the names of two proposed planned area developments, or PADs, that have filed requests with the Yavapai County Planning Department for zoning changes. 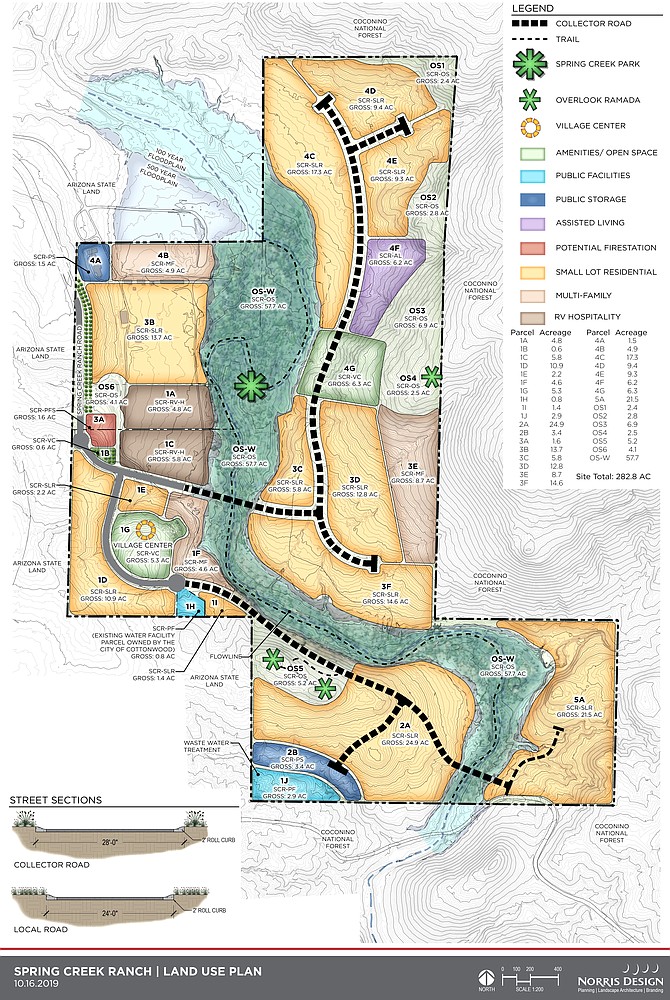 A map of the Spring Creek Ranch project. Courtesy of Lisa Borowsky

She thanked the community for such a huge turnout and encouraged higher regular involvement by the community in CCA events. She outlined the proposals and explained some of the handout packets that were distributed and encouraged citizens to provide direct feedback to Yavapai County.

No developers spoke at Tuesday’s meeting.

Several residents who spoke encouraged the public to email, type or hand-write letters or emails to the Yavapai County Planning and Zoning Commission, which will hear both projects Thursday, Dec. 19, in Cottonwood.

“We need to speak to the County P&Z board in its own language,” said Denise Sterling, one of the speakers who implored the group to get involved.

The two proposals involve hundreds of residential units. The Spring Creek project involves RV spaces and is closer to 89A, accessed by Spring Creek Road. Villa Bellagio is off of Oak Creek Valley Road and Waddell Road and involves shopping areas and hundreds of hotel rooms. The two projects would bring thousands of residents and visitors into a rugged area that has been lightly inhabited for the past 100 years.

Concerns about whether there is enough available water to support the thousands of new residents and visitors was raised by nearly every speaker. Schools, fire risk, affordability of housing in each plan, ability to get emergency vehicles in along narrow roads across rugged land and environmental impacts were just some of the topics discussed.

Jackson pointed out to the audience that the Cornville Community Association, while its input to the county is non-binding, has a long tradition of being involved with planning in the area and maintaining a rural feel to the land. County Planning and Commission reviews focus on regulation and procedural compliance. The 10-member board makes recommendations on the projects for final review by the Board of Supervisors.

Neither body is permitted to discuss water or sewer provisions of a project, which involve separate state regulation and permitting.

The Cornville plans were not immediately available in digital form, but Jackson said those would be up-loaded to the association’s website before the Dec. 19 County Planning and Zoning Commission meeting. Jackson said the two proposals must be weighed against the parameters in the master plan.

At least two speakers encouraged residents to tell the county what they do want to see, that fits into Cornville’s plan, and what development should look like in the area.

No one who spoke was in favor of the projects as currently proposed.

Yavapai County Supervisors Randy Garrison and Tom Thurman were both in attendance, as were fire personnel.

Cornville resident Jim Collins asked why the two-acre parcel requirement that is part of the default residential zoning currently in place couldn’t be maintained to minimize the high-density concerns associated with both proposals.

Mackenzie Anair, who teaches third-graders at Oak Creek Elementary, said the community should build off of what it has, rather than go in a completely different direction. Her comments were immediately followed by cheering and applause, as were many of the other speakers.

Several speakers emphasized that letters and concerns, to be read by the county’s planning commission, should be emailed to planning@yavapai.us.