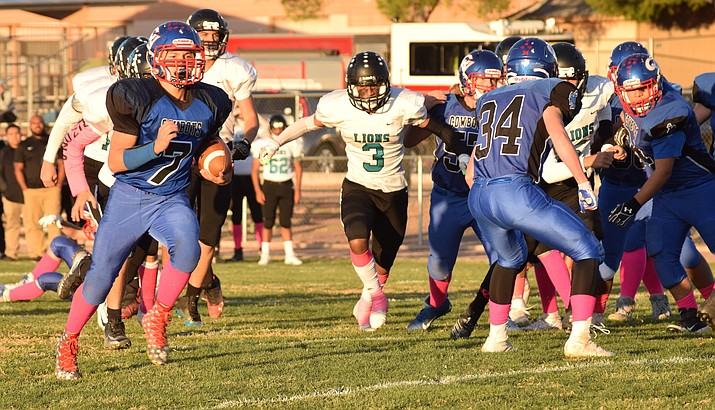 Camp Verde High football went 2-7 but a strong finish suggests Cowboys fans should be optimistic about the direction of the program.

The Cowboys opened their eighth straight losing season with a 2-3 record in their freedom games but went 0-4 in the brutal Verde Region. The region featured two top five teams in Trivium Prep, the No. 2 seed the state tournament and Parker, the fifth seed. Both advanced to at least the quarterfinals.

On the positive side, the Cowboys held their own against 3A Chino Valley early on and won their rivalry game against Sedona Red Rock for the third time in the last four years.

This season ends a two-year scheduling block and relief could come for the Cowboys. Although most of the other Camp Verde sports are moving up to 3A, starting in 2020, the AIA will use the average weighted Maxpreps power rating to determine conference placement rather than enrollment size. So Camp Verde could remain in the 2A and the top schools would move up to 3A.

Although teams can petition to move down to 1A from 2A, they wouldn’t normally move down to 1A even if they really struggle because the new classification system applies to 11-man football and 1A plays 8-man football. So the teams that would get moved down normally would likely remain in 2A, again potentially helping the Cowboys.

The Cowboys’ rushing attack was one of the best in the state.

Camp Verde had four of the top eight runners in the region. Sophomore quarterback/running back Garrett Dulaney was fourth in the region with 662 yards on 112 attempts, 5.9 yards per carry and he had seven touchdowns.

Next was junior running back Peyton Kelley, who had 554 yards on 106 carries and he had four touchdowns. Sophomore quarterback Jacob Oothoudt ran for 402 yards and sophomore running back Kayden Boggess rushed for 322 yards.

Dulaney was fifth in the region in scoring, with 58 points and sixth in touchdowns and total yards.

If the Cowboys’ two headed quarterback monster of Dulaney and Oothoudt continue to push each other, they will be very tough to stop.

On defense Kelley was eighth in the region in tackles with 62 and junior linebacker Jacob Kane was ninth (58).

Early in the season the players on the opposing sideline chanted “he’s a freshman” after one of their rookies made an impressive play.

To that a Camp Verde coach from other sport said, “yeah but so are all of those guys.”

Camp Verde played this season with only five seniors, four of which started playing football at CV this year.

The Cowboys were so young this season that nearly their whole team was able to play in a JV game against Avondale St. John Paul II in the last week of the regular season (Camp Verde’s varsity game that week had been canceled). Camp Verde won 46-16.

That win came a few days after Camp Verde finished their varsity season on a high note, narrowly losing to then No. 1 Trivium Prep after outscoring the Crimson Knights 34-14 in the second half and 16-0 in the fourth quarter.

Trivium Prep has won 10 games in a row, last losing over a year ago. In their game before they played the Cowboys, TP beat No. 5 Parker 41-28.

Dulaney had 16 carries for 213 yards and Oothoudt 14 carries for 103 yards. The Crimson Knights gave up 146 points in their other eight regular season games.

Considering how the Cowboys played really well in flashes this season and how they ended it once their younger players had a chance to gain experience, the future certainly appears bright for Camp Verde football.