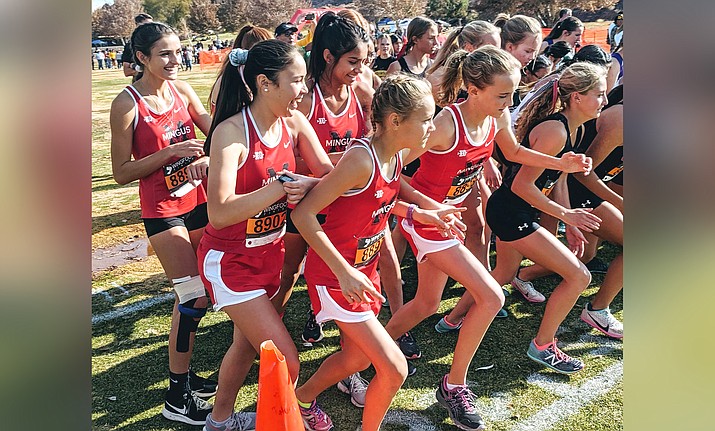 Thanks to a strong cast of newcomers and improved veterans, Mingus Union girls cross country is returning to state to this weekend.

The Marauders will run at the Division III state meet on Saturday at 1 p.m. at Cave Creek Golf Course in Phoenix.

“I believe it’s going to be great weather, it’s gonna be a great day and the kids are very excited,” Mingus head coach Dave Moncibaez said. “The girls are just really excited and just kinda hungry and we tell them ‘go out there and make a statement’ because on a great day they can be top 3-5 team in the state. I truly believe that and if they believe it too then they go out there and get it, it’s going to be a great day.”

It’s the first time Mingus Union has qualified a team for the state meet since 2015 when both the boys and girls made it and both were 14th. Last year Meg Babcock ran alone at state, finishing 94th and Hannah DeVore was 85th in 2017. In 2016 no Marauders made it to state.

Moncibaez said last year the coaching staff, now in its second season, had the goal of putting together two teams for sectionals. They had eight runners total in 2017.

“Considering where the program was and how it has developed, it’s pretty impressive, just the turnaround,” Moncibaez said. “This year was not only do we want to have two teams but we want to get into state and with the boys being on that bubble, just missing it, but the girls getting in, we feel pretty good about the program and the way it’s progressing. So that’s another phase that we go through and now year three coming up next year, not to look past this year because the girls can still make a statement on Saturday but going into next year too the future looks pretty good and pretty impressive and we got a great bunch of kids that just put it all out there and just got for it.”

Moncibaez said the freshmen have been exceptional.

“Makena Bliss is just dominating on the front line and following her is Maisie Babcock and Safiya Sweeney and then we got top notch sophomore girls Aubrey Peterson and Claire Peterson and then followed by new cast members Keeleigh Kreiner and Josey Valenzuela,” Moncibaez said. “I mean you definitely have a great team, they’re fun to be around and they bring positive energy It’s been a fun run and we’ve excited for them and we can’t wait to see what they do this Saturday.”

Moncibaez said the sophomores and older have been exceptional.

“Their improvement has just been amazing,” Moncibaez said. “Obviously adding the new cast members, but just going out there and being competitive It’s just one of those things where you never know who’s gonna show up but at the same time they do it for each other and that’s what we just as a coaching staff just look at it and are like ‘it’s a great group of kids that just go out there and work hard for each other.’”

Meanwhile the boys just missed out on returning to state, one spot short.

“The boys ran exceptionally well I was very impressed and proud of them and their efforts,” Moncibaez said. “I mean 26 seconds between one and five is just amazing and they just missed it by a blink of an eye, which was heartbreaking but the way they responded and the way they came together, about next year, they feel really good about themselves and they know that they can be not in state but they can compete for that championship.” 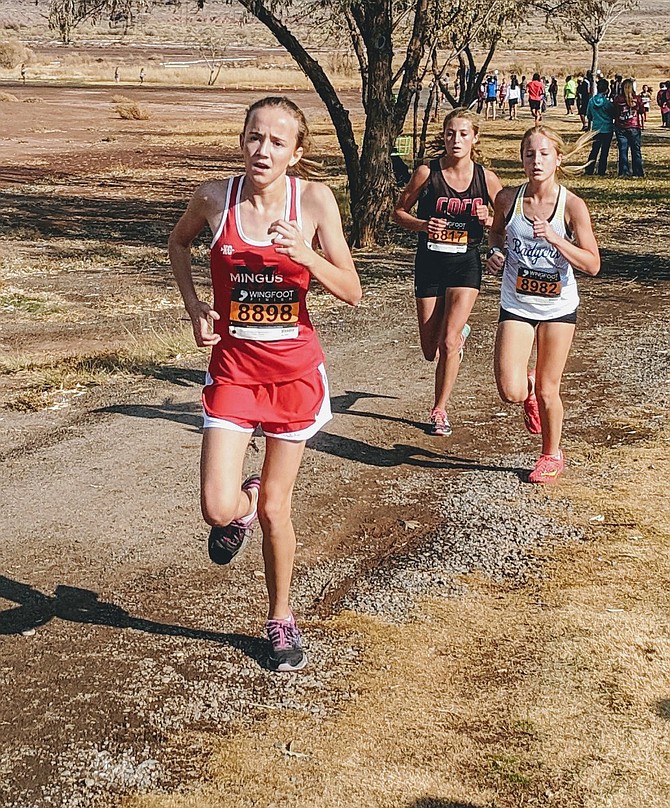 Bliss recorded a personal record at sectionals, besting her mark at the same course at the Holbrook Invitational a couple weeks before by about 21 seconds. She has finished 21st or higher in all the Marauders’ meets, including winning The Peaks XC Invite and finishing in the top 10 in four of their six regular meets.

“Just based off of her growth this year, she’s definitely one of the top runners in the state as a freshman as her progression keeps going,” Moncibaez said. “She’s going to definitely be one of Mingus’ elite athletes.”