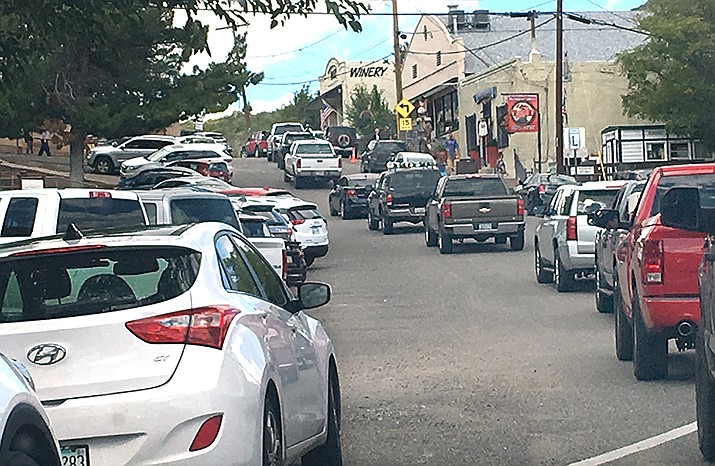 The Town of Jerome is moving forward with its plan to create a district in which businesses will be able to pay a one-time fee to acquire parking spots from the town for buildings that require on-site parking. VVN/Vyto Starinskas

JEROME —- The Town of Jerome is moving forward with its plan to create a district in which businesses will be able to pay a one-time fee to acquire parking spots from the town for buildings that require on-site parking.

Currently, new businesses need to have on-site parking (off-the-street) or purchase deeded parking in another location in town.

If the ordinance amendment is eventually approved, it will be a third option for some businesses to get approval for the construction of their buildings, explained Jerome Zoning Administrator John Knight on Wednesday.

It would also be an option for current businesses to expand or make changes to their businesses, Knight said.

The process will be addressed at a neighborhood/community meeting, a Jerome Planning & Zoning Commission meeting and at least two more Council meetings, he said. The neighborhood meeting has not been set, but could be in December, so P&Z wouldn’t get it until January, at the earliest.

A Parking Overlay Zone map will be placed over the C1 (commercial) zone in Jerome. The businesses in that zone will be able to buy into 21 designated parking spaces on land owned by the town.

The one-time fee will pay for the construction of the number of parking spaces that the businesses will be requesting.

That way the town does not have to pay to develop those parking spaces and the money can be used to develop new public parking areas in town, Knight said.

The council has met three times to discuss the overlay map and associated text, but there is much more time for discussion, Knight pointed out.

Currently, those spaces are near the town’s volleyball court and Jerome’s Sliding Jail. New businesses could still be added before the map is approved.

Businesses could be added later to the Overlay District with a re-zone, he said.

The ordinance is for businesses and will not affect the construction of new homes which will still require on-site parking or driveways in residential zoned areas.

Knight has said that the town probably would not be going through this process right now if it was not for the Cuban Queen issue that has moved to the forefront.

But Knight said it’s something that “should have been done a long time ago. It’s been a long-time coming trying to find other parking solutions.”

The amendment to its decades-old zoning ordinance would allow new businesses, such as the owners of the Cuban Queen property, to construct buildings without on-site parking — or having to lease parking spots in other parts of town.

Under the current zoning ordinance, adopted in 1977, businesses in Jerome need to provide on-site parking (off the street) or secure a parking spot elsewhere in the commercial zone with a deed for that specific use, said Knight and Candace Gallagher, the town manager, who added that the new proposal would be an amendment to the original zoning ordinance.