Bomb squad called in to Village of Oak Creek bank
Man in custody, according to Sheriff's Office 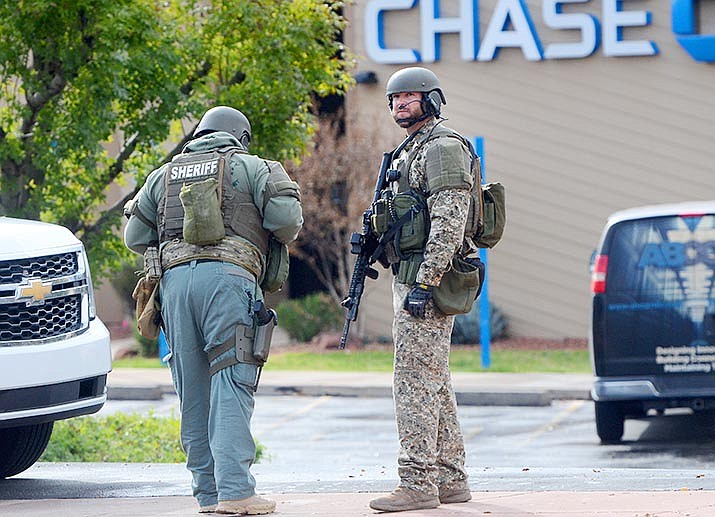 Police closed State Route 179 in both directions in the Village of Oak Creek for several hours Thursday afternoon after a man claimed he had a bomb in a van just outside of a local bank. No explosives were found; the man was detained. VVN/Vyto Starinskas

Police closed State Route 179 in both directions in the Village of Oak Creek for several hours Thursday afternoon after a man claimed he had a bomb in a van just outside of a local bank.

Yavapai County Sheriff's Office spokesman Dwight D’Evelyn told the Verde Independent that one man, who was inside the bank at about 12:20 p.m., claimed to be had a bomb in a van parked nearby.

That man is in custody, he said, but no details about his identity or other circumstances have been released.

The Department of Public Safety has sent a bomb squad, using an armored car, to the bank to check the involved vehicle.

State Route 179 was closed for about two hours before it was briefly re-opened about 2:30 p.m., but it was closed again once bomb-squad procedures began in earnest before the road was opened for the rest of the evening at about 5:30 p.m.

Heavy rain and hail began falling in the area about the time the road re-opened at 2:30 p.m.

D'Evelyn said employees and customers were able to eventually evacuate. The man broke out a window and was otherwise exhibiting strange behavior, he said.

Deputies arrived and he was eventually subdued and taken into custody inside the bank, located on the northwest corner of SR 179 and Verde Valley School Road.

The man's vehicle, an orange-colored van, remains parked outside the bank and the surrounding area has been evacuated as a result.

A YCSO armored vehicle was also en route to the scene. D'Evelyn said a "Code Red" was issued to all Village of Oak Creek residents. 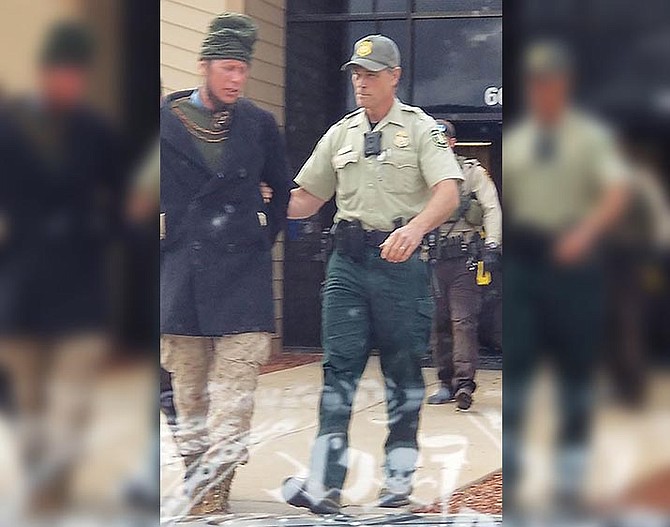 A reader sent this photo to the Verde News as a man was apparently being detained following an incident at Chase Bank in the Village of Oak Creek on Thursday. The Yavapai County Sheriff's Office didn't immediately identify the suspect, who allegedly told people inside the bank that he had a bomb in a van outside. No explosives were found using a bomb robot and other equipment and a shutdown of State Route 179 for several hours. Courtesy photo 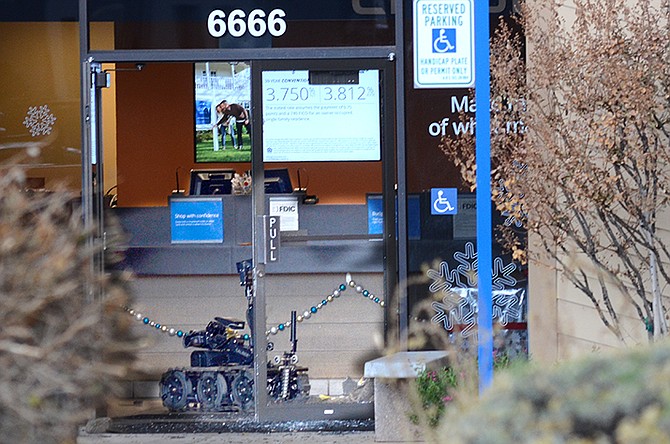 A explosive-seeking robot was sent in to the Chase Bank branch in the Village of Oak Creek on Thursday following an incident in which a man allegedly said he had a bomb in a van outside and smashed the window on the door in this photo. The man was detained, but his identity was not immediately released; no explosives were found after a shutdown of State Route 179 for several hours. VVN/Vyto Starinskas photo