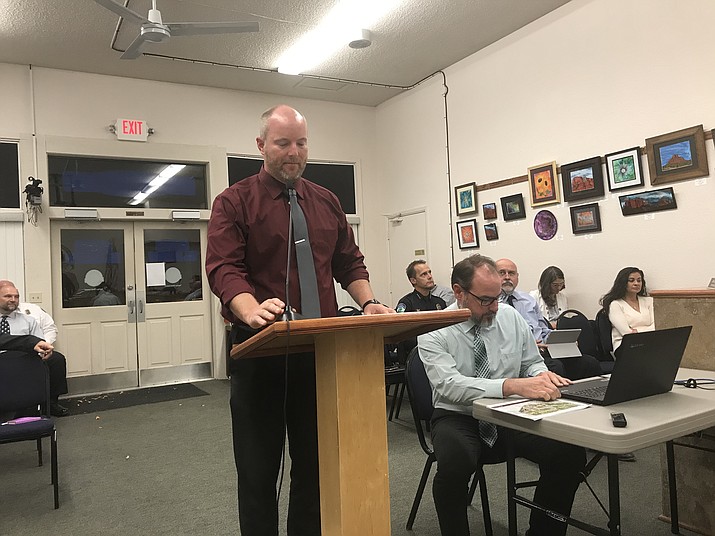 The city’s recreation services director, Hezekiah Allen, along with Brian Sager from Norris Design of Phoenix, presented the final master plan for Riverfront Park to the Cottonwood Council on Tuesday. The plan can be found online here: bit.ly/34dL9I4

COTTONWOOD — Wednesday morning, if one were strolling through the City of Cottonwood’s biggest, most complex park, it might have been tough to tell a major transformation of the park was taking place.

That might be because the transformation of Riverfront Park, so far, is taking place mostly on paper and computer screens.

The city’s recreation services director, Hezekiah Allen, along with Brian Sager from Norris Design of Phoenix, presented the final master plan for Riverfront Park to the Cottonwood Council on Tuesday. The Council approved the plan, which enhances the ability of the city or nonprofit or other groups to apply for grants or seek outside funding for specific improvements to the park, as the city has no Fiscal 2020 funding for such projects.

The Cottonwood Parks and Recreation Commission recently went over and added some input on the master plan, which was paid for entirely through grant funding. Norris Design put the plan together, gathering public input through several public sessions, along with online surveys.

In July, a dinnertime presentation of a draft of the master plan —made at Riverfront Park itself — drew 80 people for feedback.

Sager acknowledged a Verde News poll, which garnered input from more than 1,500 interactions, all of whom ranked different activities they’d like to see offered at the park. A November 2018 in-person input session involved 128 members of the public.

City Manager Ron Corbin said he would gladly meet with any individuals, companies or groups willing to fund various aspects of the master plan. It can be found online at this link.

The plan for the 100-acre park relocates some facilities, such as the dog park, which would move much closer to the Verde River’s edge, maintaining both large-dog and “shy dog” areas along virtually the same square footage as its current footprint.

Other areas, such as baseball/softball diamonds and the community garden, wouldn’t be relocated, and parking, driveways and other elements would be built around them.

A circular drive around the eastern foursome of ball diamonds — a perimeter loop — is a part of the master plan.

A splash park was discussed on the master plan, as was a kayak course. For environmental reasons, these must be placed away from the main flood plain of the river, which means other items would be moved closer.

Allen touted the contiguous stretch multi-purpose green space that would be allotted for small soccer fields in the park’s southwest corner.

A splash pad scored high at last November’s meeting and in both the Verde News and grant-funded polls.

An education building would be located near the splash pad. Councilor Michael Matthews questioned how that made it into the final master plan; Corbin pointed out that the education center would also be near the Water Reclamation Plant, and could be both constructed and operated by specific organizations looking to do environmental and possibly water-centered outreach and education.

Disc golf, the roller hockey rink and the locations of restrooms were all discussed extensively during the July meeting.

“If you go to Arizona State Parks, with something connected to a specific master plan, that makes a big difference,” Sager said.